Aboriginal and Torres Strait Islander readers are advised that this story contains names and photos of those who have died.


Soul singer Wilma Reading performed all over the world - in Tokyo, Singapore, New York, Calcutta, London and St Petersburg - yet until recently she has remained relatively unknown in her own country. In a career spanning five decades, Wilma has appeared on The Johnny Carson Show, had her own residency at the legendary Copacabana Nightclub in New York, and is the only Australian to ever perform with the Duke Ellington Orchestra.

Wilma was born in Cairns, Queensland, to an English-Irish father and a mother of Kalkatungu and Erub Islander heritage. She grew up in a very musical family – her parents were involved in musical theatre and jazz, and the family would often sing together, songs by artists such as The Mills Brothers and Nat King Cole, whom they had heard while listening to the radio. In 1957, Wilma formed a vocal group with her two sisters, Phronsie and Dulcie, called The Reading Sisters. They performed together at family gatherings and birthday parties before entering the radio talent show Australia's Amateur Hour. In 1957, they won the state championship and travelled to Sydney for the finals, where they came in second place.

After this success, Wilma briefly left music so she could focus more of her time on sport. In 1959, she travelled to Brisbane with her softball team who were competing in a state competition. The group were out one evening when Wilma was asked to get up and sing to celebrate a teammate’s birthday.

"So I went up to the piano and did three songs, and after ten minutes or so, a gentleman came to our table, said he liked my singing and asked would I like a job with his band?"
Scenester, 2018

She told him if he wanted to hire her to perform with his band he would need to write to her parents for permission. Two weeks later a letter arrived from bandleader Lali Hegi, asking Wilma’s parents if the 17 year old could move to Brisbane and front his seventeen piece band at the Ritz Ballroom. Her father gave his approval but said she could only try for six months – if she was unable to make a living out of her music by that time she had to come back home. It was in Brisbane that she learned to sing jazz – performing the music of Ella Fitzgerald, Sarah Vaughan and Frank Sinatra. She appeared with the band three nights a week but quickly filled up the rest of her week performing show tunes at jazz clubs as well as fronting a local coffee shop trio. She worked hard and within 12 months, had played all the biggest venues and appeared on one of the ABC’s first entertainment shows in Brisbane.

In 1960, she decided to challenge herself and see what she could achieve in Sydney. She recorded ‘In My Little Corner of the World’ and ‘If I Were a Bell’ with Festival Records, and through this got the opportunity to become a regular on Brian Henderson's television variety show, Bandstand. Here she worked with the biggest Australian acts of the day: Col Joye, Dig Richards, the Decru brothers, the Allen Brothers, Noeleen Batley and Judy Stone. While performing on Bandstand, Wilma was offered a job overseas - a month-long Singapore residency performing at the Supper Club of the prestigious Goodwood Hotel. From a young age, Wilma had been determined to follow in her aunt’s footsteps, legendary jazz singer Georgia Lee, and become a world-renowned performer.

"She went before me. I respect her very much because you consider, for an Indigenous girl from Cairns, Far North Queensland, population of perhaps five or eight thousand people at the time. There were absolutely no government grants at that time. She saved her money, probably by cleaning floors, washing, ironing… she became a singer. She became a star!"
National Film and Sound Archive, 2009

Wilma took a huge risk and left her Bandstand family and professional network in Sydney and flew to Singapore.  Her residency was extended twice and developed into a series of residencies across Asia, which saw her visit Saigon (now Ho Chi Minh City), Bangkok, Tokyo, Hong Kong and Calcutta (now Kolkata). While in Manila, Wilma met her husband, Ray Lehr who would also become her manager.

One evening Wilma was performing at the Tokyo Hilton Hotel when she was spotted by an American talent agent who loved her show and offered her and her dancers the opportunity to tour America. They moved in 1964, and her first job was at The Riviera Hotel in Las Vegas.

“Las Vegas was hectic for me because it was nothing like what I had engaged with before… the whole way of life was turned around. We lived by night and slept by day. We had to do that because of the timetable. But it was great because we could meet other people – other artists.”
The Wilma Reading Story: Message Stick, May 2011, Australian Broadcasting Corporation

During this period Liberace frequently came to see her show, and she met Tony Bennett, Louis Bellson, Dean Martin, Frank Sinatra, Dave Brubeck, and her idol Ella Fitzgerald. Word of Wilma's talent spread and while she was in New York, Wilma was invited to audition for the great American jazz musician and bandleader, Duke Ellington; composer of popular ‘It Don’t Mean a Thing if it Ain’t Got That Swing’ and ‘Mood Indigo’.

“I met with him, he sent me to Billy Strayhorn. So I’m at his place, he sits at the piano and I could have chosen one of the easier songs, ‘Satin Doll’, or ‘Don’t get around much anymore’. But I didn’t think of that. I auditioned with ‘Lush Life’. Three minutes passed and then he turned to me and said: “Thank you for singing the song the way I wrote it.”
Australian Jazz, 2009

She was hired on the spot and went on the road with ‘The Duke’ and his orchestra, appearing in Philadelphia and New York. Wilma is the only Australian to have performed on stage with Ellington. After touring for only a few months, she made the difficult decision to leave – Duke was the star of his show and she felt she wasn’t able to progress her career while remaining in his shadow. 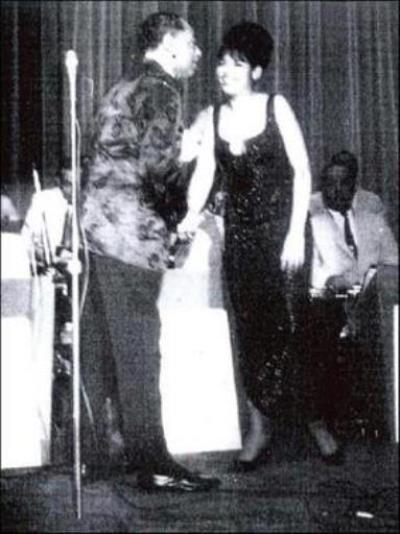 Duke Ellington and Wilma Reading in 1965. Photograph by Ray Lehr

In 1973, Wilma quit the States and moved to London. She seized the opportunity to record a self-titled LP at EMI’s studios at Abbey Road, record the title song for the Julie Andrews-Omar Sharif film, The Tamarind Seed with composer John Barry, and make regular guest appearances on over 30 British variety shoes, including The Harry Secombe Show, The Ken Dodd Show, and Stars on Sunday. This led to a coveted regular segment on Britain’s highest rated television programme, the BBC sketch-comedy, The Morecambe & Wise Show. Wilma’s popular television appearances made her a star, enabling her to headline her own show across the United Kingdom.

At the height of her fame, Wilma took on yet another challenge when she auditioned to replace Cleo Laine in the role of Julie La Verne in Show Boat at the Adelphi Theatre in London’s West End. Despite having no prior acting experience, she won the role from a pool of 100 other actors who auditioned.

“I just decided not to be scared and that’s that. After all, what did I have to lose? I went into the [musical] numbers my own way. I made no attempt to emulate Cleo’s very personal, individual style. Nobody could get away with that. I took it on the full throat without the mike and let the balcony bounce it back. I gave it my full range.”
Australian Women’s Weekly, June 6, 1973 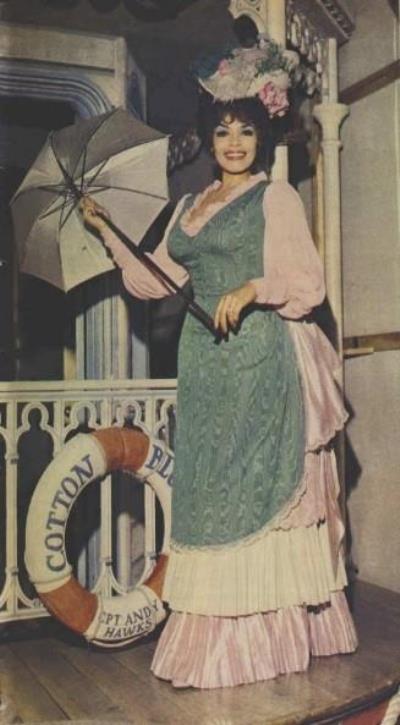 In 1977, Wilma returned to New York for another season at the Copacabana nightclub. She was engaged by the owner who remembered her as a talented performer from previous engagements with Duke Ellington and her appearance on The Tonight Show Starring Johnny Carson. During this period, she took on another acting job, starring opposite Jim Brown in the World War II film Pacific Inferno.

In 1979, while performing one night at Talk of the Town nightclub in London, she was seen by Russian diplomats who were so impressed by her talent that they invited her to tour Russia with the Moscow Symphony Orchestra. At that time, Russia was still under communist Soviet rule and Europe was divided by The Iron Curtain – an ideological, cultural and economic barrier separating Eastern European countries from the cultural influences of the West. Popular music was suppressed until recordings of The Beatles penetrated the Curtain and became a catalyst for change. As the youth of Russia fell in love with this rock n roll group, they became restless to hear more jazz, blues and pop music from the west.  Therefore in late 1978 Western artists like ‘King of the Blues’ B.B. King and Elton John were invited to perform in Russia.  Wilma Reading followed, and in 1979 was the third western artist invited to perform behind The Iron Curtain. She performed 33 shows throughout Russia in Moscow, Leningrad (now St. Petersburg) and Kiev.

Wilma Reading at the Red Square in Moscow. Photograph by Ray Lehr.

Despite her internationally successful career performing on the world stage, Wilma remained relatively unknown in Australia.

"The only problem is I was gone for so long because I built up my career overseas and would just come home to see my mum and dad and brothers and sisters. For me to get established in Australia I'd be leaving too much behind because it takes a while to get yourself established."

In 2003, she returned home to Cairns where she taught singing at the local TAFE, passing on her vocal skills to future generations. During the 2010’s, Wilma delighted local audiences when she reappeared on stage in a series of appearances at jazz festivals across the country. In August 2019, Wilma’s talents were finally recognised in her home country when she was inducted into the National Indigenous Music Awards Hall of Fame. 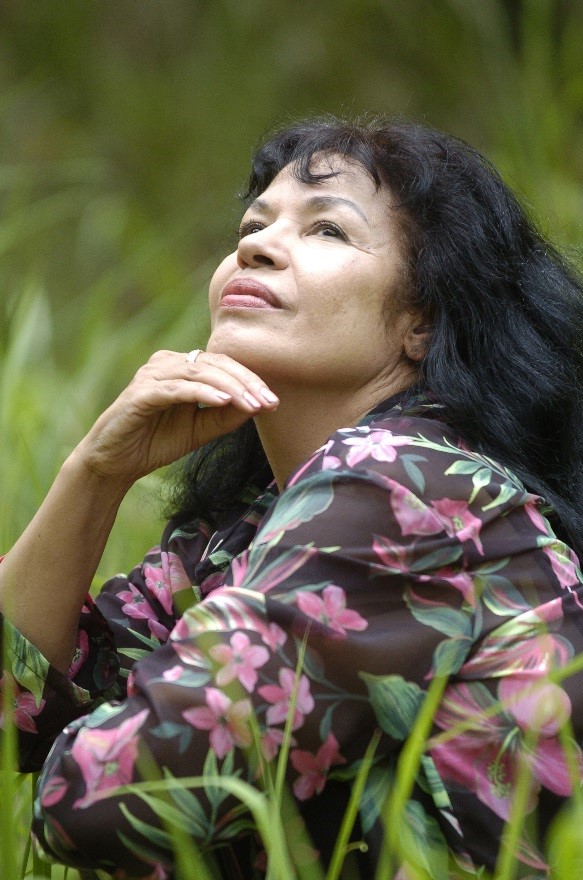 The Australian Music Vault is proud to honour the achievements of this year’s National Indigenous Music Awards (NIMA) Hall of Fame inductees, Wilma Reading and Tiddas. Now in their 16th year, the NIMAs are recognised as Australia’s most prominent showcase of Indigenous Australian music from across the country. The Awards celebrate the achievements of both emerging and established artists, and have recognised the lifetime achievements of many artists including Kutcha Edwards, Vic Simms, Henry “Seaman” Dan, Archie Roach, Auriel Andrew, Jimmy Little, Coloured Stone, No Fixed Address and Warumpi Band among many others.