The Screaming Jets recently organised a surprise 50th birthday party for their guitarist, Scotty Kingman. Singer Dave Gleeson and Scotty’s father and partner made moving speeches, but Scotty didn’t cry. Then a couple of his friends presented him with a Maton acoustic guitar, custom-made by the company’s master luthier Andy Allen.

The Maton guitar means so much to Australian musicians. As Jimmy Barnes notes, “You see everyone in Australia playing Maton guitars.”

“A Maton guitar is like a pair of R.M. Williams boots,” adds Colin Hay. “They just work.”

“I carry three Maton guitars with me,” says Tommy Emmanuel, one of seven “Certified Guitar Players”, a title bestowed by American great Chet Atkins. “I don’t need anything else.”

Maton started in a garage at a house in Thornbury, a working class suburb of Melbourne, in 1946, the same year a boy named Barry Gibb was born on the other side of the world, on the Isle of Man. The eldest Gibb brother grew up with his family in Brisbane, where he always wanted a Maton guitar but could never afford one. Years later, Barry talked to a UK newspaper about his most-treasured possessions – his guitars, including two Matons. Barry visited the Maton factory to have the guitars made.

Like the Bee Gees, Maton is a family story. It’s one of the oldest guitar companies in the world that’s still family-owned and run.

Bill May, a secondary school woodwork teacher, started The Maton Musical Instruments Company in March 1946. The name “Maton” was a combination of Bill’s surname and “tone”. Bill, who also played in a Hawaiian band, had one simple aim – to make an Australian guitar as good as any guitar in the world. 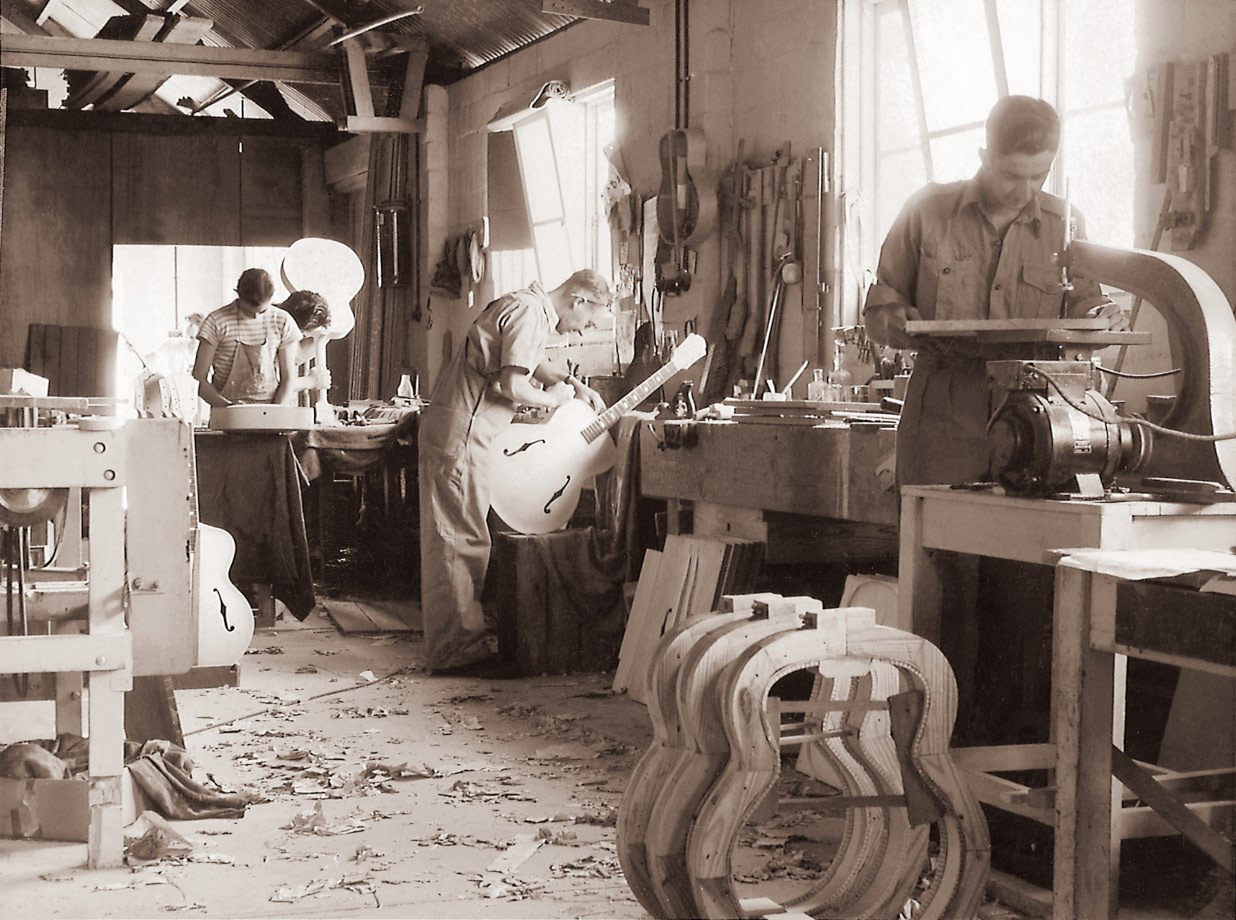 Bill understood the relationship musicians have with their instrument. “Guitars are not just pieces of furniture that you hang on the wall or occasionally play,” he said. “People regard them as a close companion, a personal possession. I’ve seen men and women come in and actually talk to their guitars. For a great artist, the instrument becomes a part of them, an extension of themselves and their fingers.” (John Butler calls his Maton Natural 12-string “Oldie”, while Daniel Johns’ custom-made Silverchair Special is known as “Goldie”).

In 1953, Bill placed an advertisement in newspapers around Australia. Today, it would be branded a “mission statement”:

“The name Maton appears only on a perfect instrument. Maton guitars are not mass-produced, but each is a handmade product built by highly skilled craftsmen.”

The guitar that Bill built has been all around the world.

Keith Richards played a Maton EG240 Supreme when The Rolling Stones recorded ‘Gimme Shelter’. The Kinks’ Ray Davies played ‘You Really Got Me’ on a Maton SE777. And George Harrison briefly had a Maton guitar, a MS500 Mastersound, which he played when his usual guitar, a Gretsch Country Gentleman, was being repaired in 1963. Because it was once played by a Beatle, it became the most expensive Maton ever – selling at auction for $625,000 in 2015. The Maton also went to Vietnam. Normie Rowe’s CW80 survived his tour of duty but was destroyed by a careless baggage handler when Normie was flying interstate in Australia.

And a Maton even appeared in an Elvis Presley movie, with Elvis playing a Maton Hillbilly acoustic flat top, a HG100, in Jailhouse Rock. Bill May went to see Jailhouse Rock and was surprised to see one of his guitars – he had no idea how the Maton ended up in Hollywood. But he thought the movie was “too loud”. Jazz was Bill’s first love, though he knew that rock ’n’ roll would be good for business, and Maton’s first electric, solid-body guitar, the Mastersound, appeared in 1957.

Maton have built some acclaimed electric guitars, including the Phil Manning Custom Stereo Model, which was the biggest-selling electric guitar in Australia in the mid-’70s. But it’s their acoustic guitars that they’re famous for.

Russell Morris, for one, loves acoustic guitars. “Something in them is magical,” he says. “The wood sings.”

Colin Hay was living in Melbourne when Men At Work became the first Australian-based band to have a number one single and album in the US. He now lives in California, and says the Maton acoustic is his way of staying connected to Australia. “Wherever I am I know that the guitar I’m playing used to be a tree in the Otways. I like that.”

The Maton factory has made more than 250,000 guitars in the past 72 years. And so many iconic Australian songs have been written on Maton guitars, including Archie Roach’s ‘Took The Children Away’, Paul Kelly’s ‘How To Make Gravy’, John Williamson’s ‘Old Man Emu’, Australian Crawl’s ‘Reckless’, Air Supply’s ‘Lost In Love’, and Mike Brady’s ‘Up There Cazaly’.

Mike insisted on playing a Maton when he performed his footy anthem at the AFL Grand Final. “I wanted to show that we made guitars – great guitars – in Australia.”

As he notes, “Maton is a dynasty, and part of our music history.”

Bill’s daughter, Linda, and her husband, Neville Kitchen, took over the company in 1987. Linda cannot play a note, “but I am so emotionally invested in this company, I couldn’t let it go”. 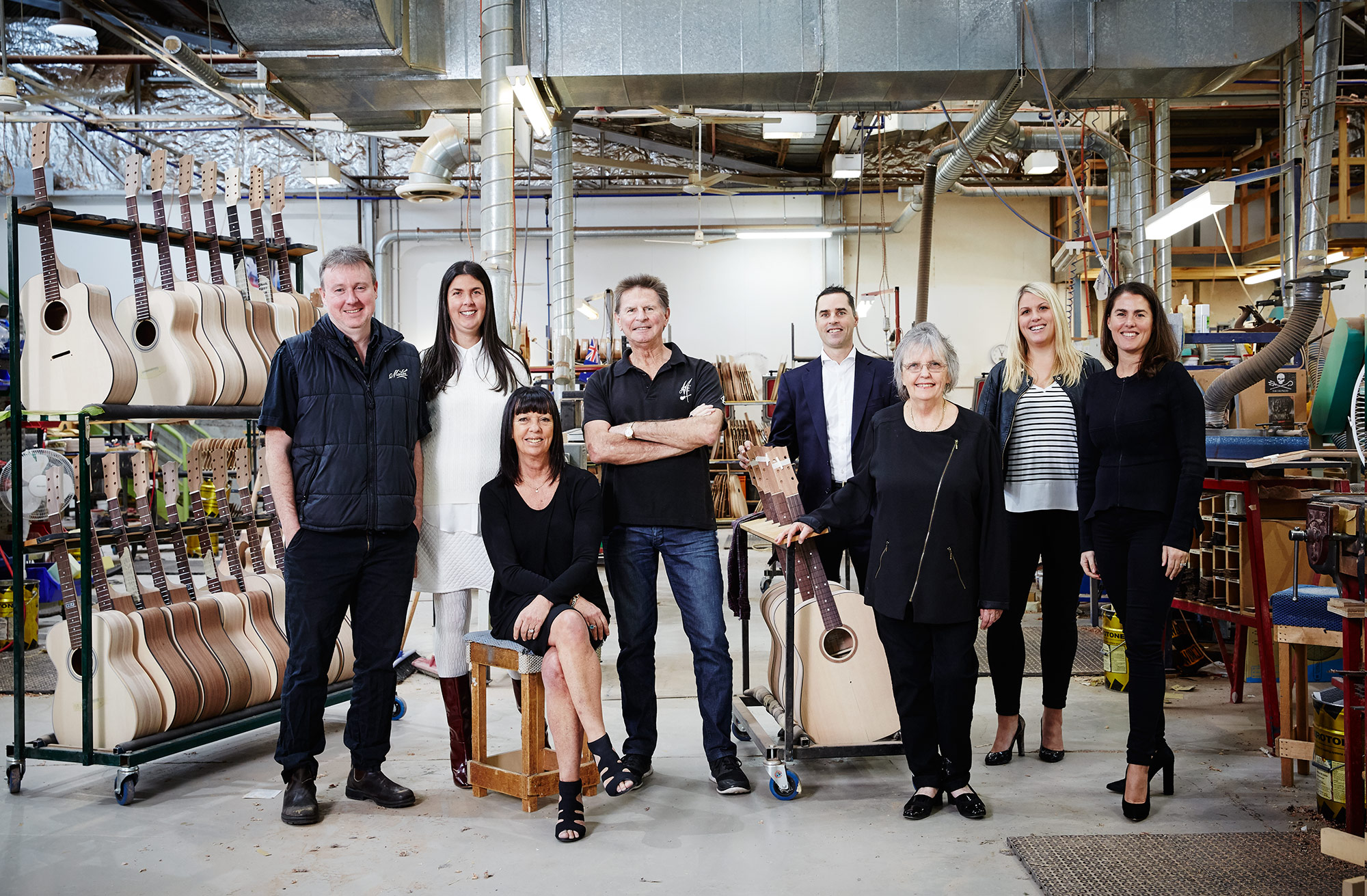 Bill’s daughters acknowledge it hasn’t been easy running a manufacturing company in Australia – Maton has survived on a string and a prayer. “In the beginning,” Susan recalls, “it was a huge struggle. Nobody was interested in an ‘Australian-made’ product.”

When Linda and Neville took over, Maton was making just 360 guitars a year, with 12 staff. But then the MTV Unplugged phenomenon in the ’90s made the acoustic guitar cool again, and by 1997, Maton was selling 3200 guitars a year – the company’s best result since the mid-’60s. They now have more than 60 staff members making more than 7000 guitars every year.

The Maton is played by acts all around the world, from Eagles of Death Metal to The Wiggles.

Tommy Emmanuel is a global ambassador for the brand. Tommy was just five when he got his first electric guitar, a Maton Sunburst MS500, in 1960. He later donated it to the Maton factory, where visitors can see a plaque just below the bridge, which Tommy’s dad attached: “Tom Emmanuel, 1 Lawson Avenue, Gunnedah.” 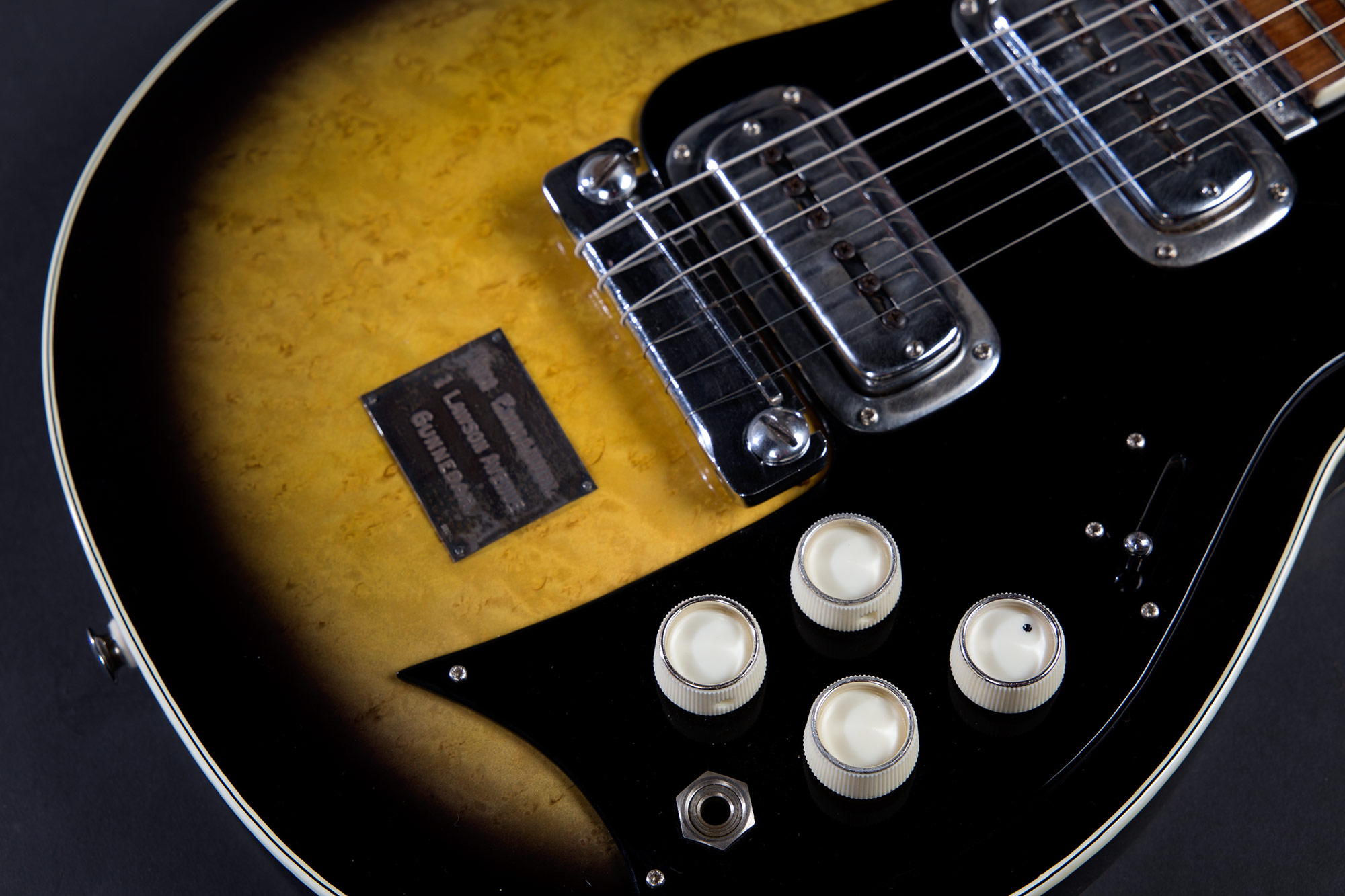 “You know, I’m not signed or bound to a contract with Maton,” Tommy points out. “I play Maton guitars, firstly because nothing sounds like a Maton guitar. When you plug it in, it kills any other guitar.”

Despite manufacturing being a tough business in Australia, Maton has remained fiercely independent and local. In the ’60s, Bill May was approached by American guitar giant Gibson to manufacture their guitars in Australia. He said no.

One in every three Maton guitars is now sold overseas, but Linda vows, “We’ll never make them overseas.”

Bill, who died of a heart attack in 1993, aged 77, was a perfectionist. His wife, Vera, recalls: “He couldn’t bear anybody ever saying that ‘near enough is good enough’.” 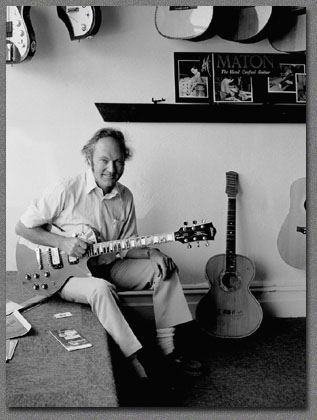 Bill May at the Canterbury factory, 1980s. Courtesy Maton Archive.

Maton remains faithful to Bill May’s mantra: “You’ve got to stick to the truth of the guitar sound – warmth and timbre with no gimmicks.” Vera, who remains the Maton matriarch at the age of 98, says: “It seemed like his soul got into those guitars.”

As Skyhooks guitarist Red Symons notes, “Why would you get a guitar from anywhere else in the world?”

Jeff Jenkins is the co-author of The Music That Maton Made (Scribe Publications, 2016)