Voice of an era - Tina Arena

One of the greatest Australian voices of all time, the iconic and inspirational Tina Arena AM, brings her Enchanté tour to the Sidney Myer Music Bowl on Saturday 15 May as part of Live at the Bowl.

Considered a national treasure, Jane Gazzo explores our love affair with the artist who recently celebrated 40 years in show business and why her voice is stronger than ever.

When Tina Arena was inducted into the ARIA Hall of Fame in 2015, she asked the audience a significant question:

“Who decides in radio that a woman at a certain point in her life no longer becomes viable? A musician’s career should be decided by the artist themselves, not a radio station.”

Arena was sending an earnest message to music programmers across the country and speaking from her own experience of being ostracised from radio in the past decade.

“I’ve struggled with the lack of support which is the reason why I took that opportune moment when I was being inducted, to make the speech that I did,” she says.

“It wasn’t an easy thing to do… but also understanding that it was time and appropriate.”

Arena has never shied away from using her voice to initiate change and speak her truth. For weeks after that Hall of Fame speech, discussions lingered across media and print about the inequality of women in the music industry and ‘ageism’ in the charts and on radio.

They were exactly the kind of discussions she was hoping for.

There are many Australian artists who possess beauty, grace and class but there is nobody quite like Tina Arena.

The daughter of a migrant family who settled in Melbourne’s north western suburb of Moonee Ponds, Arena was introduced to us via our television screens throughout the 70s and early 80s, and now she holds a special place in all of our hearts.

She made a lasting impression on Young Talent Time as ‘Tiny Tina’, the little girl with the big voice.

She was just 8-years-old when she joined the show as a permanent cast member, and with that powerful vocal range and dynamic stage presence, it wasn’t long before the entire country knew her name.

We watched her change costumes and hair styles as frequently as the song and dance numbers she was performing weekly on screen with the Young Talent Team.

We also watched as she transitioned publically into a teenager and after performing on the popular program for seven years, watched as she bid farewell to the nation.

As she was approaching her 16th birthday, Arena belted out her final numbers on Young Talent Time; memorable versions of ‘Macarthur Park’ and ‘The Way We Were’.

If it wasn’t for Arena’s strength of spirit, it might have been the last we heard of her. She tried her hand at working office jobs after leaving Young Talent Time, but they didn’t work out. She knew her calling was music.

Arena graduated from child TV star and carved out a successful solo career. Her second solo record Don't Ask was the highest-selling album of 1995 in Australia and one of the biggest selling albums by an Australian female singer to date. Don't Ask (featuring the hits ‘Chains’, ‘Wasn’t It Good’, ‘Sorrento Moon’ and ‘Heaven Help My Heart’) sold millions worldwide and was certified 14 times platinum in Australia.

In 1995, she also made history by becoming the first female artist to win both song and album of the year at the ARIA Awards for Don’t Ask, but the accolade was almost bittersweet.

“I was really shocked when I found out that I was the first woman to win that award,” she explains.

“I was really sad, when I should’ve been joyous. And I went, ‘How come I’m the first woman to win this?’ What about all the other women before me who’ve been doing stunning work? I couldn’t get my head around it..”

A conversation with Arena is refreshing for any music journalist. She has strong views on everything from where she stands with sexism in the music industry to raising her teenage son in an age of social media pressure. They are the kind of views that come with a grounded sense of family morals and values.

Few artists are keen to share their personal views for fear of backlash or upsetting the status quo, but Arena has always done things her own way.

This, in turn with her artistry, has set her apart from many of her contemporaries and is perhaps one of the many secrets of her success.

She has never been afraid to call out any kind of injustices as she sees them, especially when it comes to discrimination of women in the music industry.

”I think there needs to be a very honest discussion about it,” she says, “And a discussion where people really genuinely understand that there is inequality and that they too have a responsibility as those people in key positions to be able to change that. Because we can only change it together.”

And it’s this steadfast resolve that has seen Tina Arena be embraced by a whole new generation of fans. Much like Daryl Braithwaite, Jimmy Barnes and Kylie Minogue, Arena has won over the Gen Z crowd who have christened her as a cool nostalgia icon.

She has performed at Splendour in the Grass twice – once with electro-pop upstarts Client Liaison and then with young singer-songwriter Matt Corby. Then in 2017, she was the keynote speaker for the Bigsound Music Conference where she again won over a new generation of fans as she talked about her remarkable 40-plus year career journey in the Australian music industry.

But perhaps it’s the things we as the public don’t often hear about that keeps Tina Arena such an interesting and curious artist.

In 2003 she collaborated with New York based DJ, The Roc Project on a track called, ‘Never (Past Tense)’ which became a major dancefloor hit in America.

There was another release with French rapper and beat maker Axiom called ‘Bagdad’ which mixed French hip hop with Arena’s soaring vocals and was picked up by dance radio throughout France. And who can forget her 2017 collaboration with aforementioned Sydney outfit Client Liaison on ‘Foreign Affair’.

In 2016, Tina was invited to sing as a guest of honour at the prestigious Odeon of the Herodes Atticus in Athens, Greece – a venue of great prominence and culture.

“That was amazing!” she smiles, “When you arrive at a venue that is more than 2500 years old where every rock has been strategically placed. Where every porthole, where everything that surrounds you is steeped in history and beauty… It doesn't get any better than that.”

And then there is France.

It was a country where Tina Arena found unexpected success in the 00s through theatre work and later, her recordings which became instant hits. She clocked up over five million album sales there alone.

In 2009, the French showed their love and appreciation for Tina Arena when she was bestowed the highest possible honour for an Australian artist: a knighthood of the French Order of Merit for her contributions to French arts and culture.

At the time, Arena attributed the award to ‘an honest career’ – she had never tried to be anything but herself when it came to her artistry and expression; a trait she believes the French valued above all else.

Honesty is also a word she uses when casting her mind back to her iconic 1994 hit ‘Chains’. It enjoyed massive airplay and Top 10 chart success in 12 different countries and is probably one of her most requested songs to date.

“I'm really proud of that piece of work,” she says. “It is a particular song and a particular subject matter that I think any human from any walk of life, from any colour and creed can completely relate to. And I think that’s why it maybe did have the effect that it did.”

To this day ‘Chains’ also enjoys status as Arena’s most played work on Australian radio – on mostly nostalgic stations, despite the fact she has released countless singles since ‘Chains’ including her most recent single ‘Church’; a stunning and dramatic pop piece co-written with Bachelor Girl’s Tania Doko.

Despite the name, the song is not deep in religious undertones but more an empowering anthem, although whether Australian radio will pick up ‘Church’ and play it is anyone’s guess, but it does bring us back to her 2015 ARIA Hall of Fame Speech.

“Women have always been at a great disadvantage in the music industry in Australia, whatever department. Whether it be radio, whether it be singers, whether it be songwriters, whether it be sound engineers, whether it be lighting, production. We have always been on the back foot and I just thought it was time that I spoke up about it and told people that it's not acceptable that that continue to be the standard in this country… What it was, was to make them (the radio programmers) aware that we deserve to be heard, even in our 40s, regardless of whether you desire us physically or not. It should never be the prime motivation. The motivation should be the spirit of the woman and what it is that we both have to give one another and that we have to learn from one another.”

A fierce advocate for positive change within the arts industry, now more than ever, Arena’s voice is incredibly relevant and an inspiration for a whole new generation.

Her presence has also paved the way for upcoming Australian female artists to reach new heights.

To enjoy a career in the music industry is a feat but to have endured the decades without changing to stylistically suit the times, to always speak your truth and call out that which you feel is not balanced and to still remain an important and beloved artist both here and overseas, is a triumph.

Quite simply, Tina Arena is a national treasure.

Enchanté: The Songs of Tina Arena
With special guest Eric Avery and accompanied by Melbourne Symphony Orchestra
As part of Live at the Bowl on Saturday 15 May 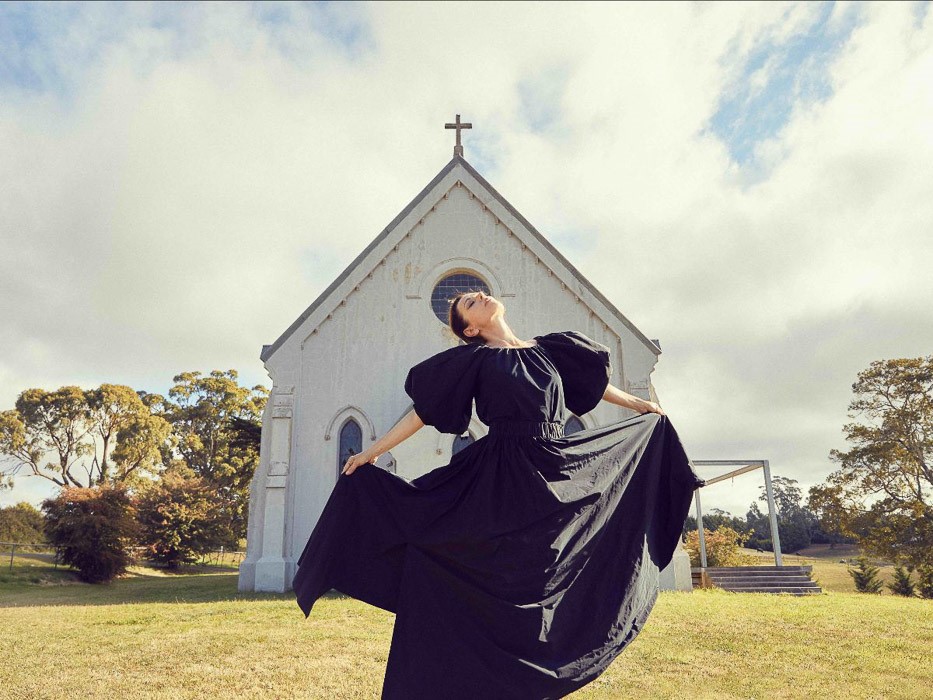 Jane Gazzo
Jane Gazzo is a broadcaster, TV presenter, music journalist and published author who began her career in radio, aged 16. Since then, she has presented nationally on Triple M and Triple J as well as BBC Radio 6 in the UK and has hosted television shows such as Recovery on ABC TV. She spent eight years as a presenter on Foxtel's Channel V, where she reported from music festivals, red carpet events and hosted live TV shows, interviewing some of the biggest and best names in the music world.

Jane is chair of the Australian Music Vault advisory committee and serves on the board for government youth organisation The Push. Her first book, John Farnham - The Untold Story was published in 2015.