Dame Olivia Newton-John AC DBE is one of the world’s most successful recording artists having sold an estimated 100 million records worldwide. In a career spanning six decades, she has earned a legion of fans as a teen popstar, Eurovision finalist, country music star, screen idol, music video pioneer, and as an environmental activist.

An acquisition was made possible through generous philanthropic donations to the Australian Performing Arts Collection from the Carroll Bequest, the David Richards Gift, Frank Van Straten AM and Adrian Turley, the Minogue family, a Gift in memory of Barry John Murnane and John Frost AM. The generosity of a number of our key supporters allowed us to acquire from the auction and build a collection of material representing the contributions and achievements of one of Australia’s most important artists for the Australian Performing Arts Collection. The diversity of items purchased will enrich the Collection for researchers and curators. It will also provide the ability to tell stories from a number of different phases of Newton-John’s career and will ensure her legacy is accessible for generations to come.

“I am thrilled that some of my stage clothes and sketches that my friend costume designer Fleur Thiemeyer created, which I wore during the height of my career in the 70s and 80s, will now be carefully preserved for future generations to see. I am so proud of Fleur and delighted that they will become a permanent part of the Australian Performing Arts Collection at Arts Centre Melbourne,” says Newton-John. 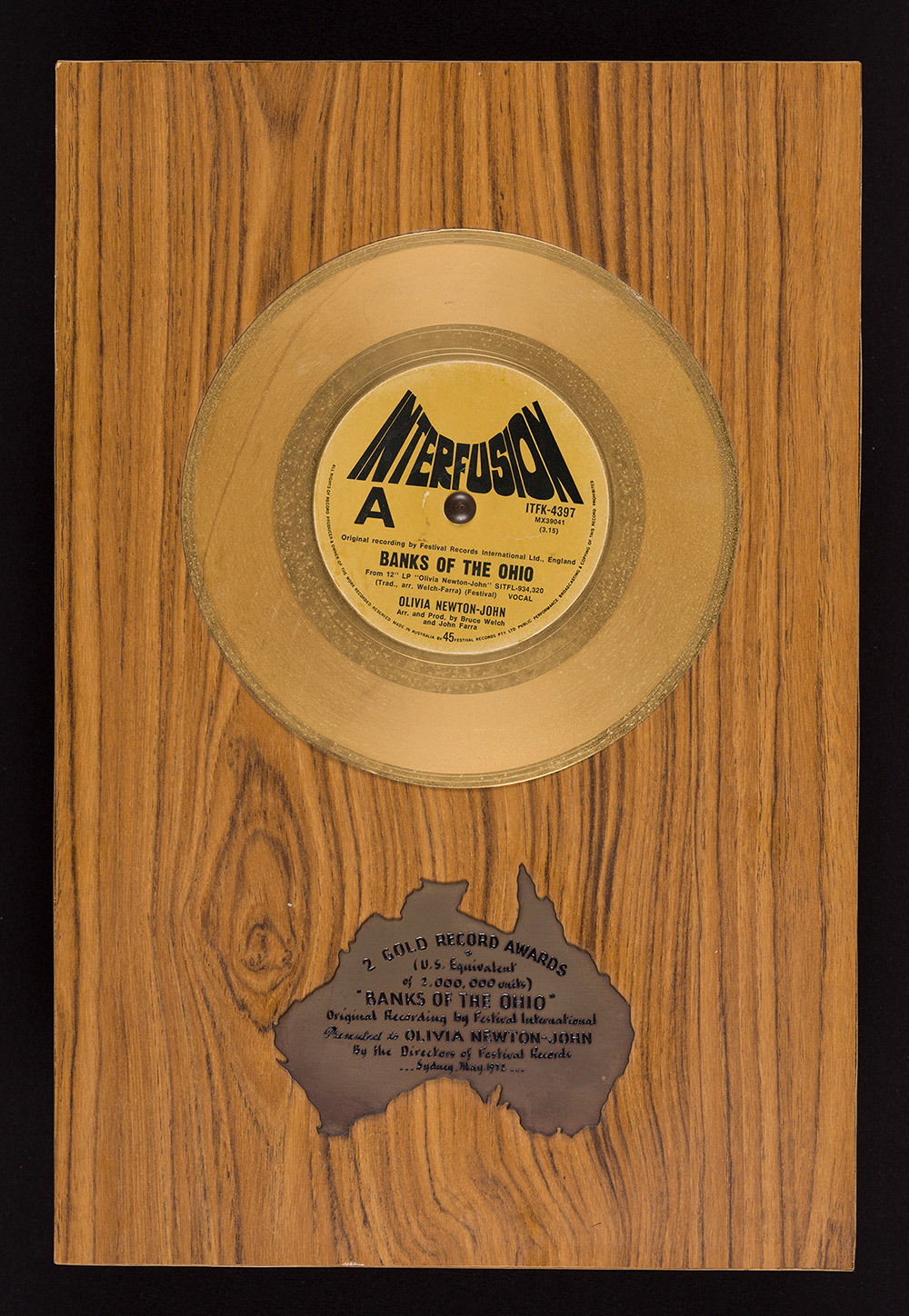 Born in England in 1948, Newton-John moved to Melbourne with her family in 1954 when she was five years old. Aged just 15, Olivia had her first taste of musical success when she won a talent contest on the popular Australian television program, Sing, Sing, Sing in 1964. The prize was a trip to London; a big step for one so young. The trip was delayed to allow Olivia to take up offers to appear as a regular guest star on television shows such as The Happy Show - where she was billed as ‘Lovely Livvy’ – and The Go! Show, where she would meet her future singing partner, Pat Carroll and music producer, John Farrar. 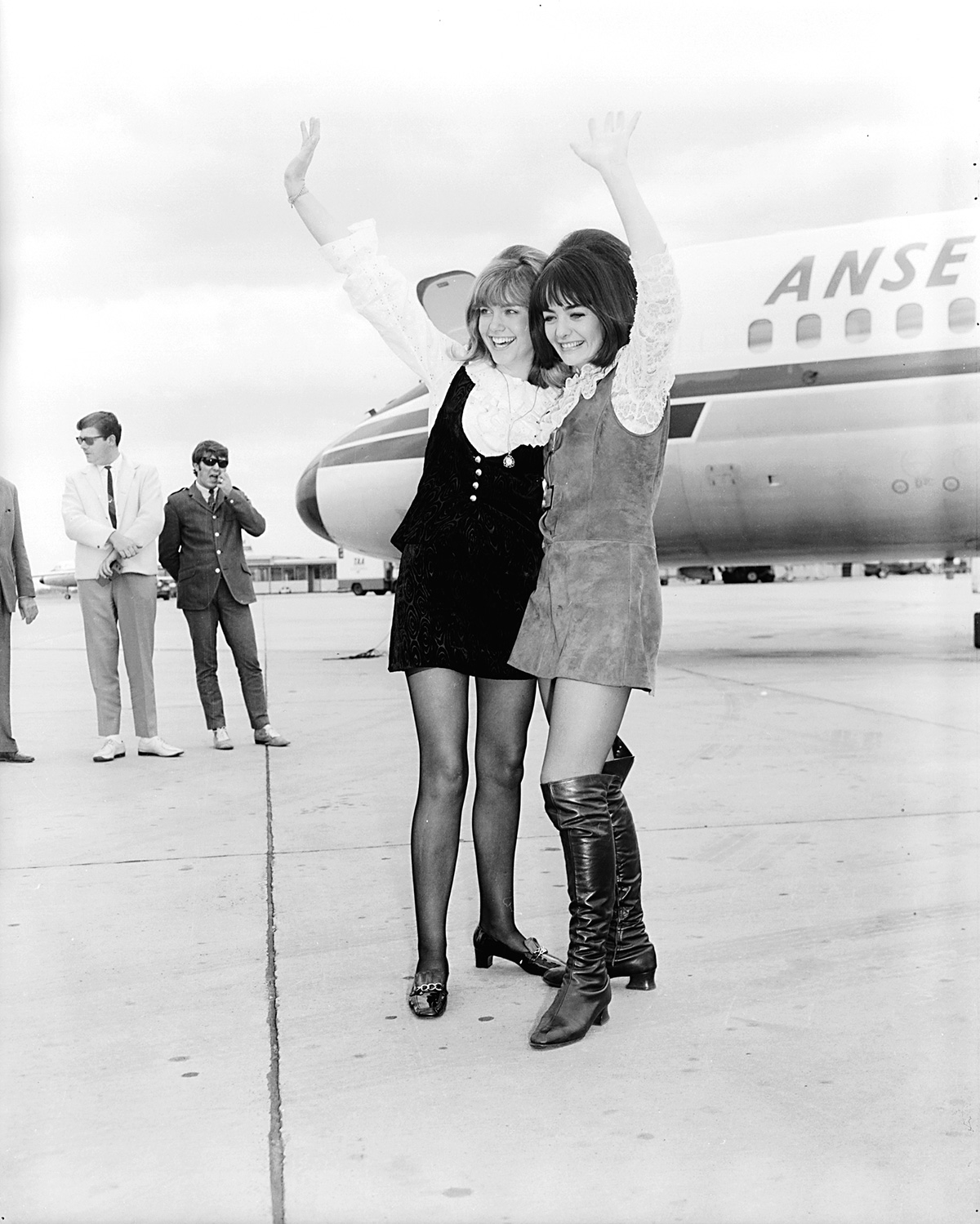 In 1966, she travelled to London where she recorded her first single ‘Till You Say You’ll Be Mine’ for Decca Records. Her initial homesickness was alleviated when she was joined by Pat Carroll. As “Pat and Olivia”, the pair toured clubs and army bases until Carroll’s visa expired forcing her to return to Australia. Their paths would cross again, however, when Carroll returned to London with new husband, John Farrar. Farrar was to play a pivotal role in Newton-John’s international career for decades to come as a songwriter and producer of many of her greatest songs, including her early country hits through to ‘You’re The One That I Want’ and ‘Physical’.

Newton-John’s first solo album If Not For You was released by Festival Records in 1971. The album features singles ‘Banks of the Ohio’ and her first No.1 hit, ‘If Not For You’. Produced by Farrar and English musician Bruce Welch, the song’s success prompted Newton-John to consider a move to the USA to pursue a career in country music. In 1973, she earned her first Grammy Award for Best Country Female Artist for the song, ‘Let Me Be There’. 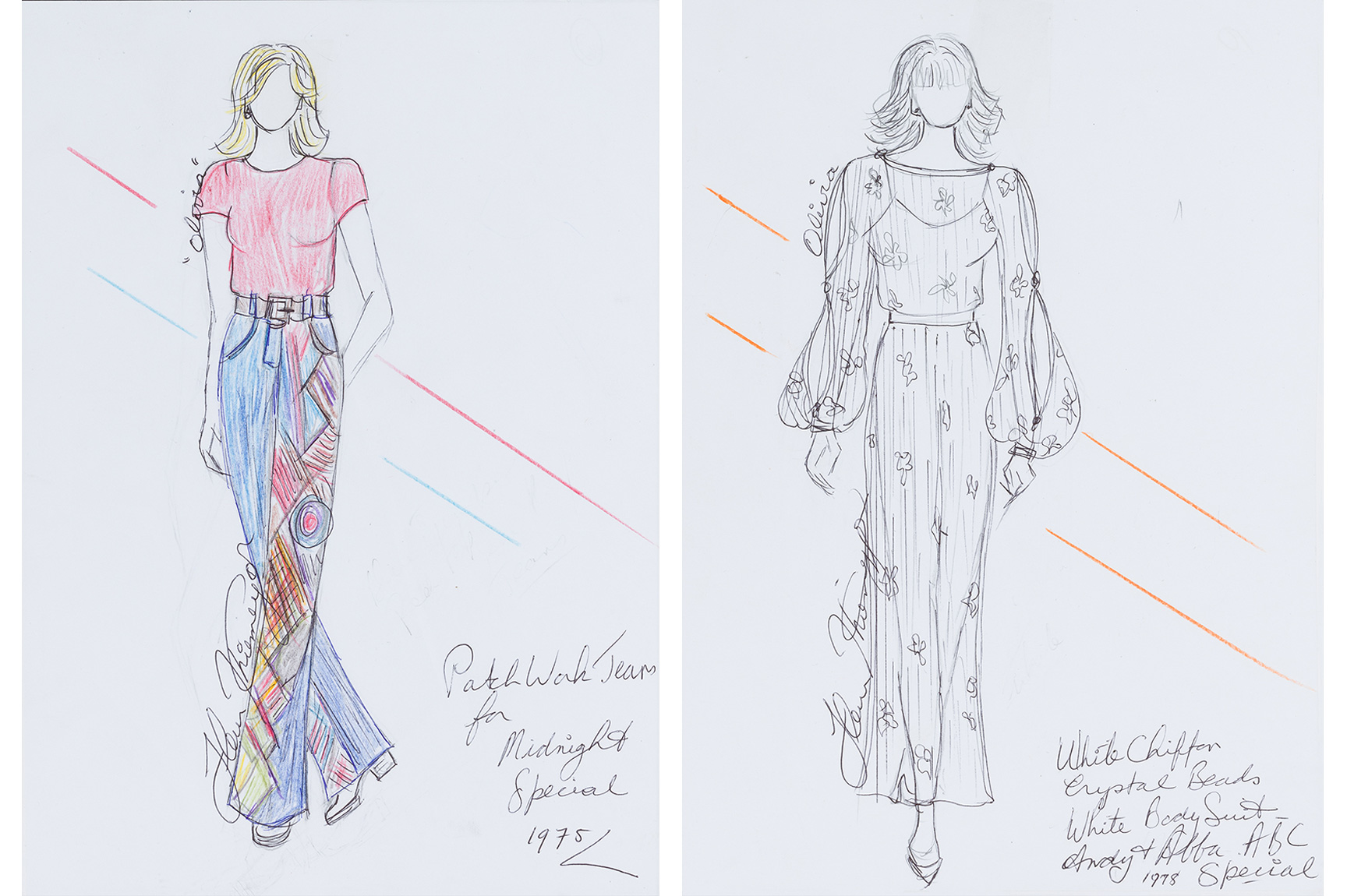 As her star status continued to rise, Newton-John surrounded herself with a strong creative team of expat Australians. While visiting Australian songwriter Steve Kipner with Farrar in West Hollywood, Newton-John was introduced to glamourous Australian couple, singer Darryl Cotton (Zoot) and costume designer Fleur Thiemeyer at a pool party being held around the apartment’s swimming pool. At the time, Newton-John was preparing to perform in Las Vegas for the first time as opening act for American country singer Charlie Rich. It was suggested that she wear dresses for the performances, and Thiemeyer agreed to create a range of custom pieces for her. From this point on, the group were inseparable, touring together with John Farrar on guitar, Darryl Cotton on vocals and Thiemeyer designing the on-stage looks.

Fleur Thiemeyer is now recognised as one of Australia’s most prolific music fashion designers having spent the past 30 years creating iconic costumes for film, stage, screen and music videos. Thiemeyer started her career working with The Valentines, Bon Scott, Zoot and Russell Morris in the late 1960s. Throughout the 1970s and 1980s, she worked in the USA defining the image of artists as diverse as Rod Stewart, Liza Minnelli, Dolly Parton, Mick Jagger, Motley Crue, Van Halen, Helen Reddy, The Jacksons, REO Speedwagon, KISS, Frankie Valli, KC and The Sunshine Band, Spinal Tap and Peter Frampton. 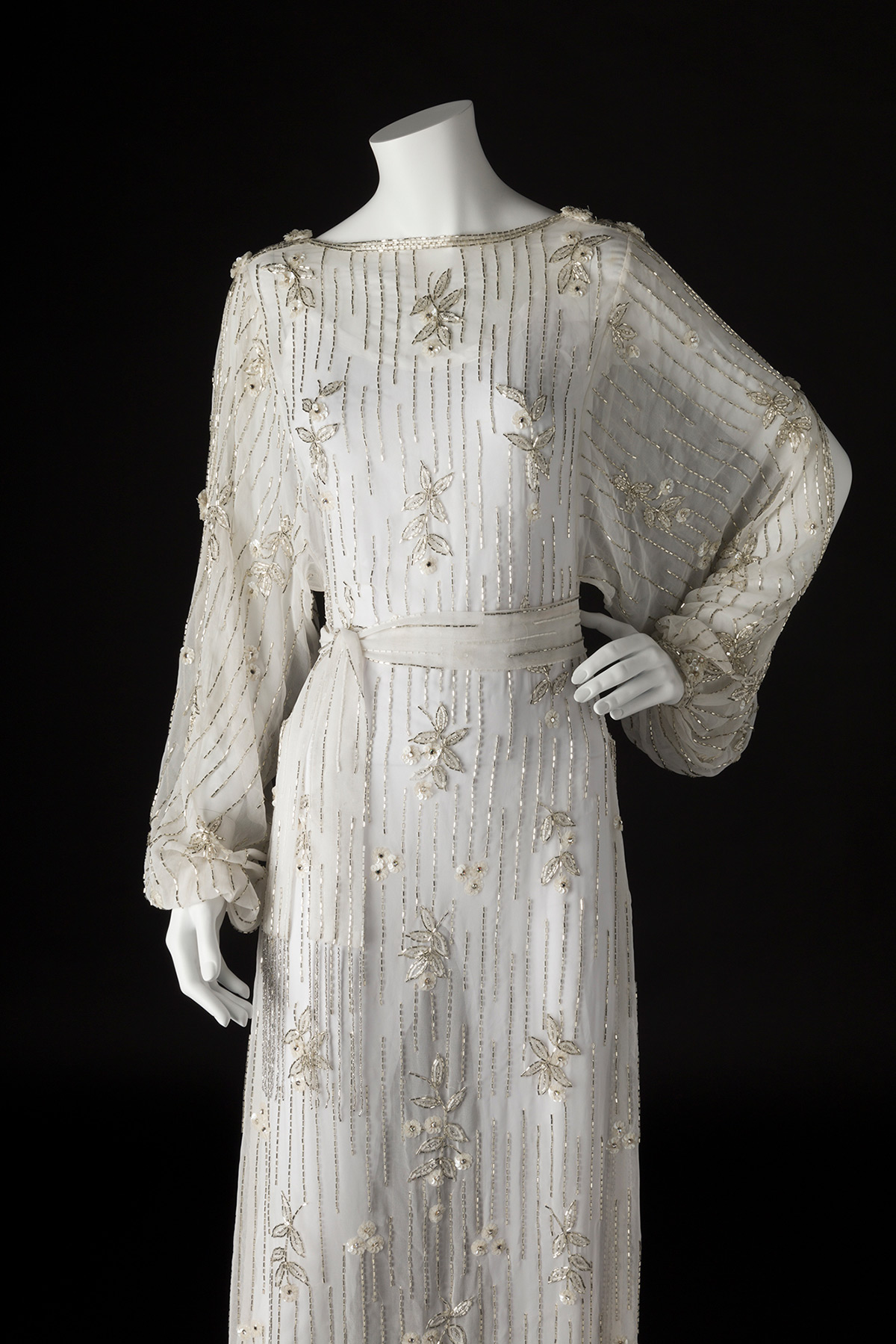 This dress was worn by Newton-John while performing a medley of songs with Andy Gibb and ABBA on her 1978 ABC TV variety hour television special Olivia. Newton-John had met ABBA briefly in 1974, when she represented Britain in the 19th Eurovision Song Contest. She was a finalist, but eventually lost to ABBA, who won with their now iconic performance of ‘Waterloo’. At the time, ABBA were hugely famous in Europe but hadn’t yet broken into the US market. Their appearance on the television special was their breakout moment.

Earlier that year, Newton-John landed the role of a lifetime as Sandy Olssen in the film adaptation of the Broadway musical Grease. The Australian expatriate community would again figure in Newton-John’s life when she was talent-spotted by Grease producer, Alan Carr, at a party thrown by fellow Australian singer, Helen Reddy in 1978. Four weeks after the special aired, the film Grease was released. The film had a profound cultural impact and cemented Newton-John’s position as a global star. The film’s soundtrack is one of the highest selling albums of all time and includes songs, ‘You’re The One That I Want’ and ‘Hopelessly Devoted To You’, written and produced by John Farrar. Mirroring her Good Sandy/Bad Sandy in Grease, Newton-John appeared clad in black leather on the cover of her next album, Totally Hot in 1978 signalling a change in sound and aesthetic developed in collaboration with her creative team, John Farrar, Steve Kipner, Fleur Thiemeyer and Roger Davies. 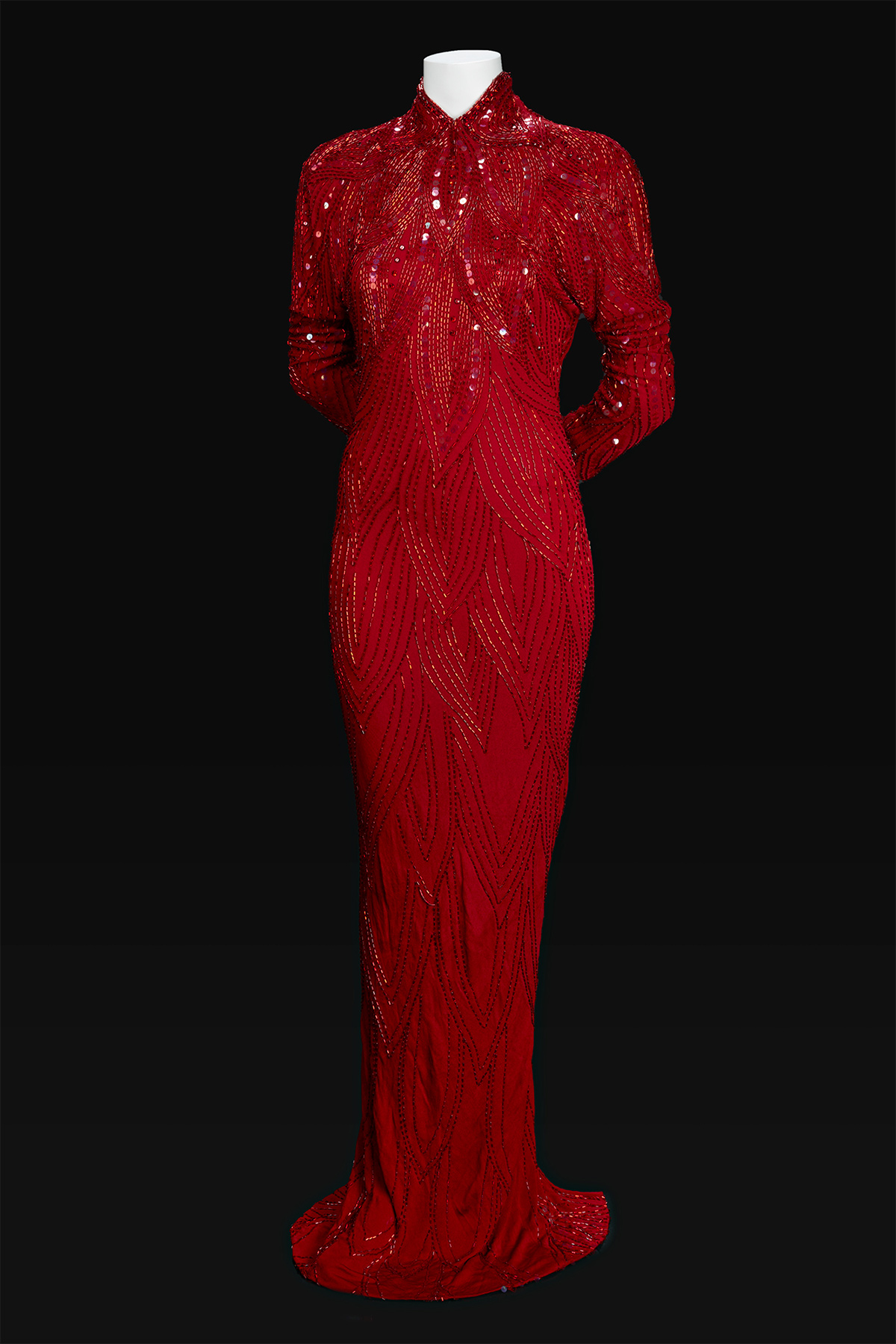 After spending much of her career based in England and the USA, Olivia Newton-John returned to Australia in 1980 to take part in the Royal Charity Concert at the Sydney Opera House performing for Her Majesty Queen Elizabeth II and His Royal Highness The Prince Philip, Duke of Edinburg alongside fellow Australians Helen Reddy, John Farnham AO and Peter Allen. She performed ‘Deeper Than The Night’ and ‘A Little More Love’ from her 1978 album Totally Hot, as well as a rendition of ’Hopelessly Devoted to You.’ 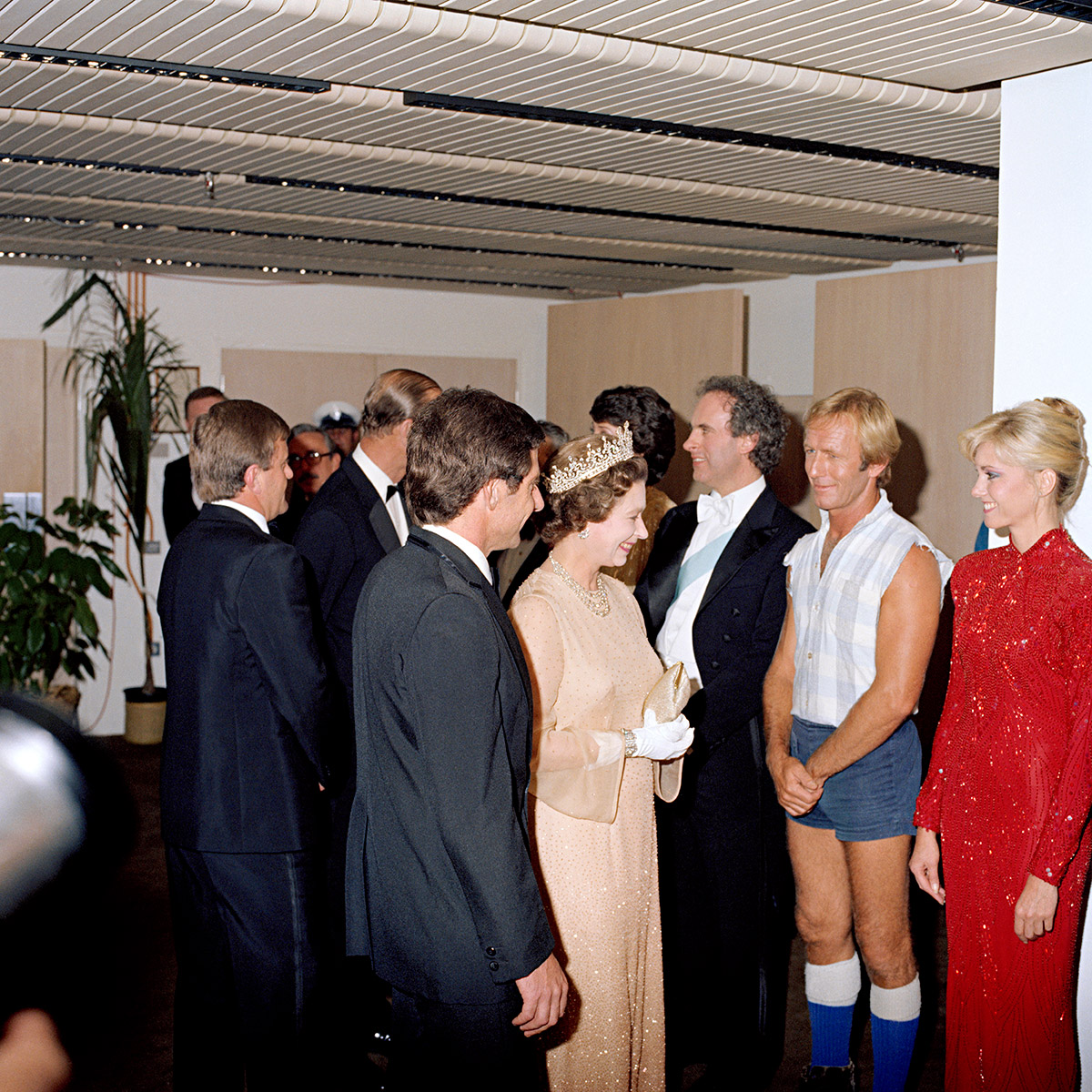 Her Majesty Queen Elizabeth II and His Royal Highness The Prince Philip, Duke of Edinburgh on 27 May 1980 at the Sydney Opera House
Commonwealth of Australia (National Archives of Australia) / CC BY 3.0 AU 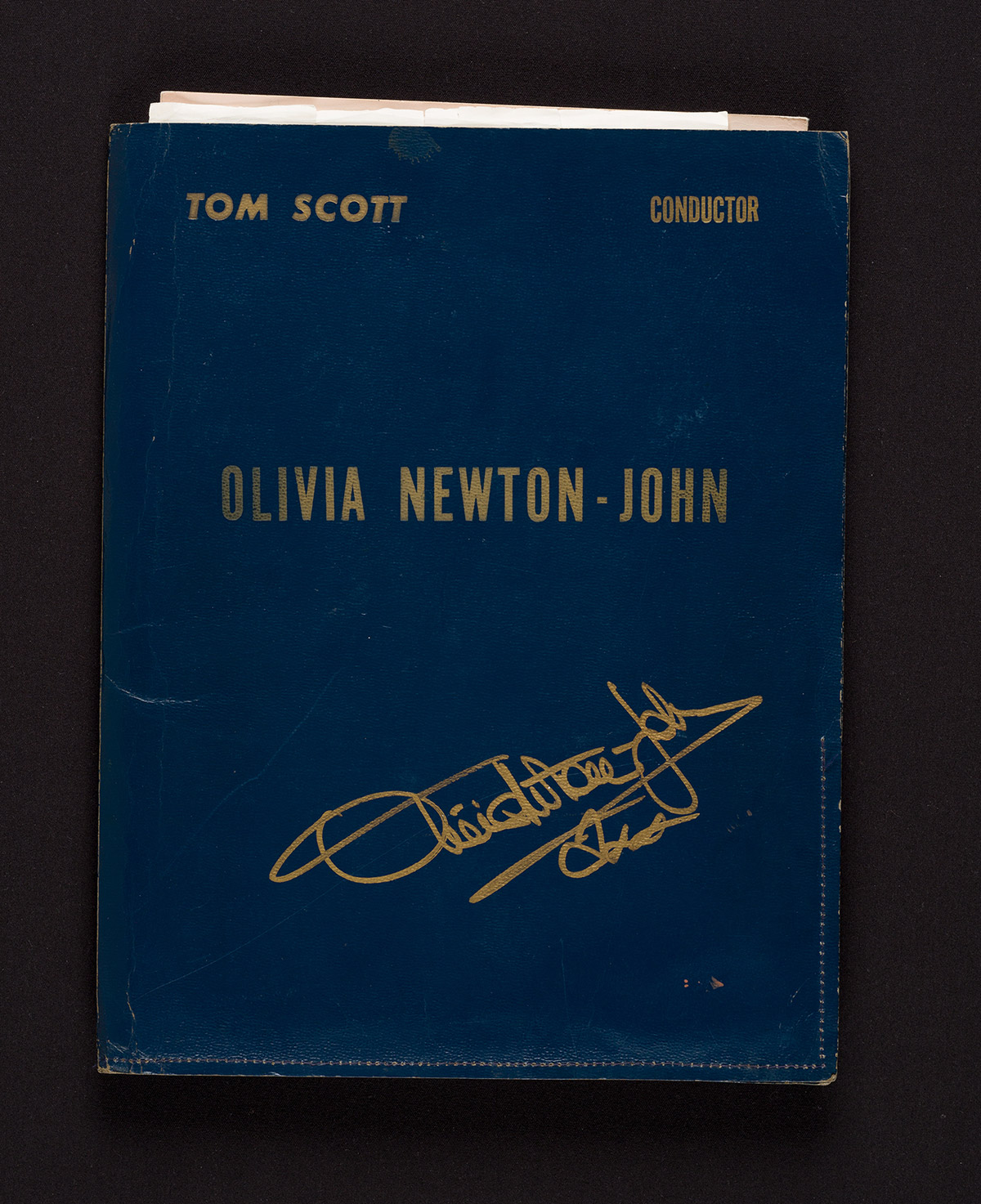 Following a return to the big screen in the 1980 film Xanadu, Newton-John continued her re-invention with the release of Physical. The album’s suggestive title single ‘Physical’, written by Steve Kipner, signalled a brand new direction in sound and aesthetic. The song raced up the charts becoming Newton-John’s highest-selling single while the accompanying video, featuring Newton-John in leotards, leggings and headband designed by Fleur Thiemeyer, kick-started the trend for work-out wear as fashion. In 1982, they took the show on tour.

This portfolio was used by Newton-John and her conductor Tom Scott during the tour, and contains hand-annotated copies of instrumental sheet music and setlists (including Sun City Superbowl) as well as several fully handwritten sheets of music (including ‘Physical’).