At a time when the world’s surfing community would normally be arriving for the World Surf League's Rip Curl Pro Bells Beach surf competition, Carl Gardiner reflects on the long association between music and surfing in Australia.

Music and sport in Australia have shared a dynamic relationship for many years, one that continues to grow and evolve as both communities adapt to our rapidly changing world. This is not surprising given the passion for music and sport we share as individuals and as a nation. In the sports landscape, we form strong ties to individual athletes and our tribal nature sees us following specific teams or sporting codes. Similarly, our music allegiances are given to particular genres, bands or artists. 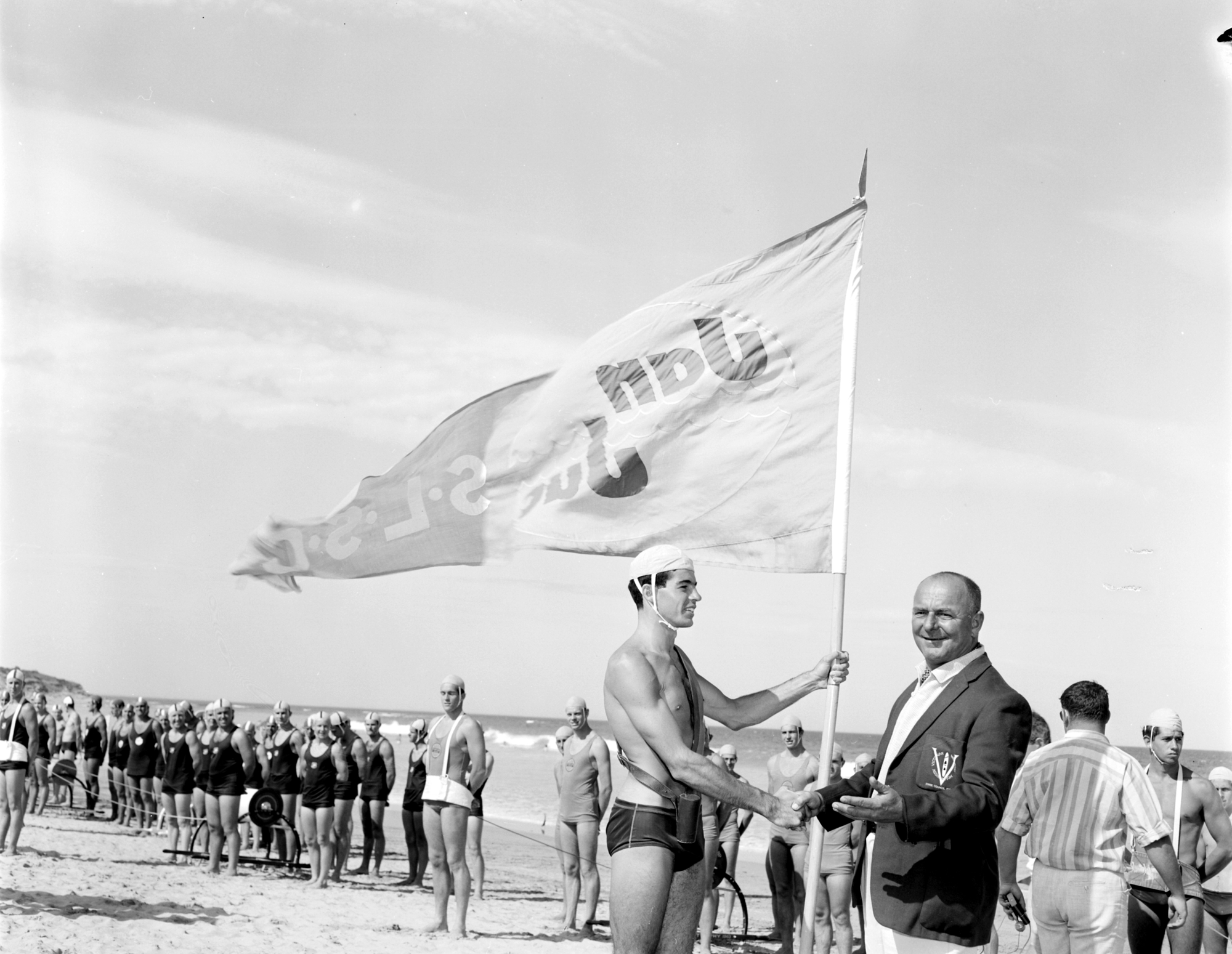 Music and sport have helped shape our national identity, providing individuals and collectives who have become great ambassadors for our country on the world stage. Particular songs have soundtracked some of Australia’s biggest sporting codes and greatest sporting achievements. Men At Work’s ‘Down Under’ has become synonymous with Australia’s 1983 America’s Cup win. ‘Come On Aussie, Come On’, commissioned as a jingle to launch World Series Cricket in 1978, reached No. 1 on the Australian Charts, and Mike Brady’s ‘Up There Cazaly’ continues to be the unofficial anthem of Australian Rules Football.

Synergies such as these are taken to a whole other level in the relationship between music and surfing in this country. Surfing is as much a lifestyle as it is a sport for many involved. It is intrinsically connected with the ocean, the weather and the environment, and many who experience ‘salt water fever’ never seek a cure. This range of touch points provides insights and inspiration for many songwriters and musicians. Some are surfers themselves, others have been exposed to the broader surfing culture that can reach far beyond Australia’s magnificent coastline. 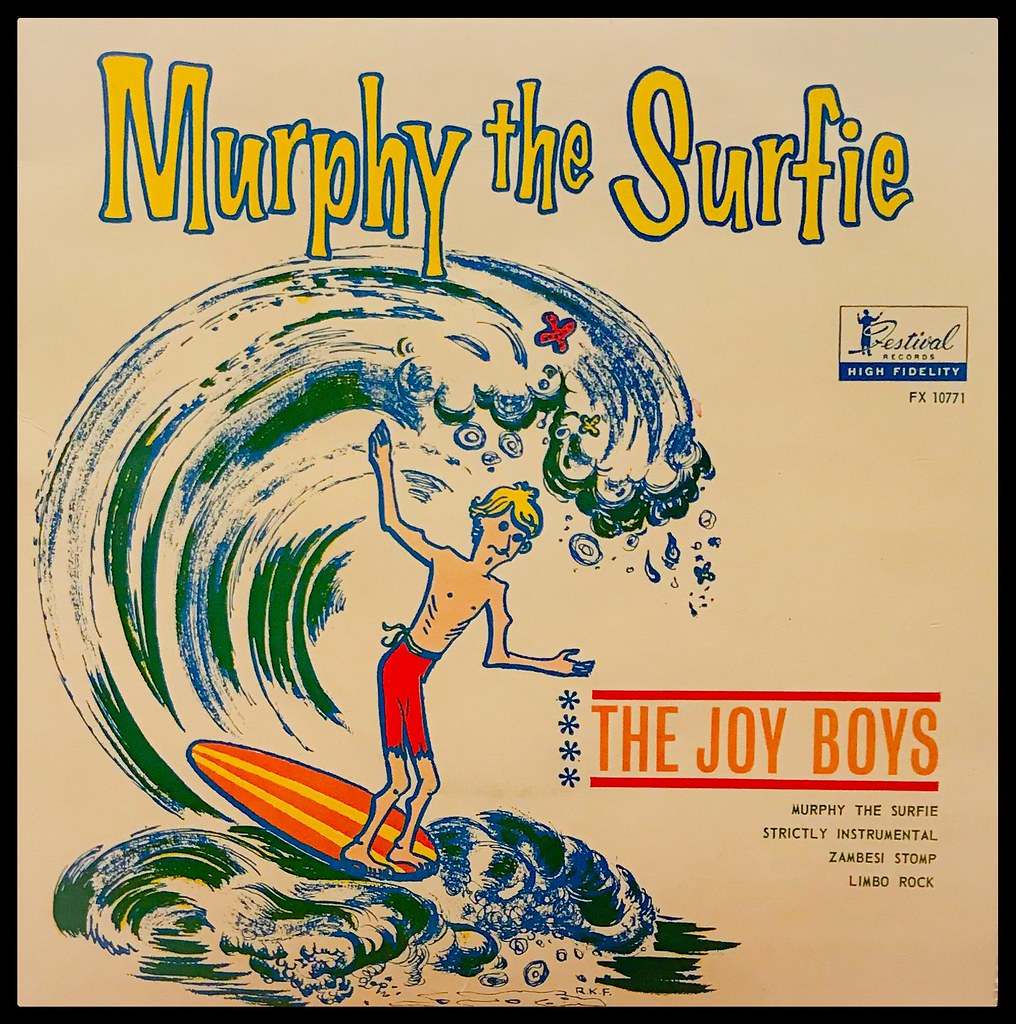 Australian surf rock really came of age in the early 1960s with tracks such as The Denvermen’s ‘Surfside’ and The Atlantics’ ‘Bombora’ establishing a sound that defined the lifestyle. In 1963, The Joy Boys released ‘Murphy the Surfie’, which was covered a year later by legendary Californian surf rock band, The Surfaris. Fourteen-year-old Little Pattie’s ‘Stompin’ at Maroubra’ reflected a dance craze that was happening at beaches and surf clubs around Sydney, and in 1964, pioneering Australian pop star, Noeleen Batley recorded ‘Surfer Boy’ one of the earliest recordings of a song written by Barry Gibb. The Surfside ’64 tour added an international dimension with The Beach Boys, The Surfaris, Paul & Paula, and Roy Orbison touring Australia with locals, The Joy Boys. When ‘Beatlemania’ hit our shores in 1964 it briefly wiped out the local surf music scene but the lifestyle kept evolving. 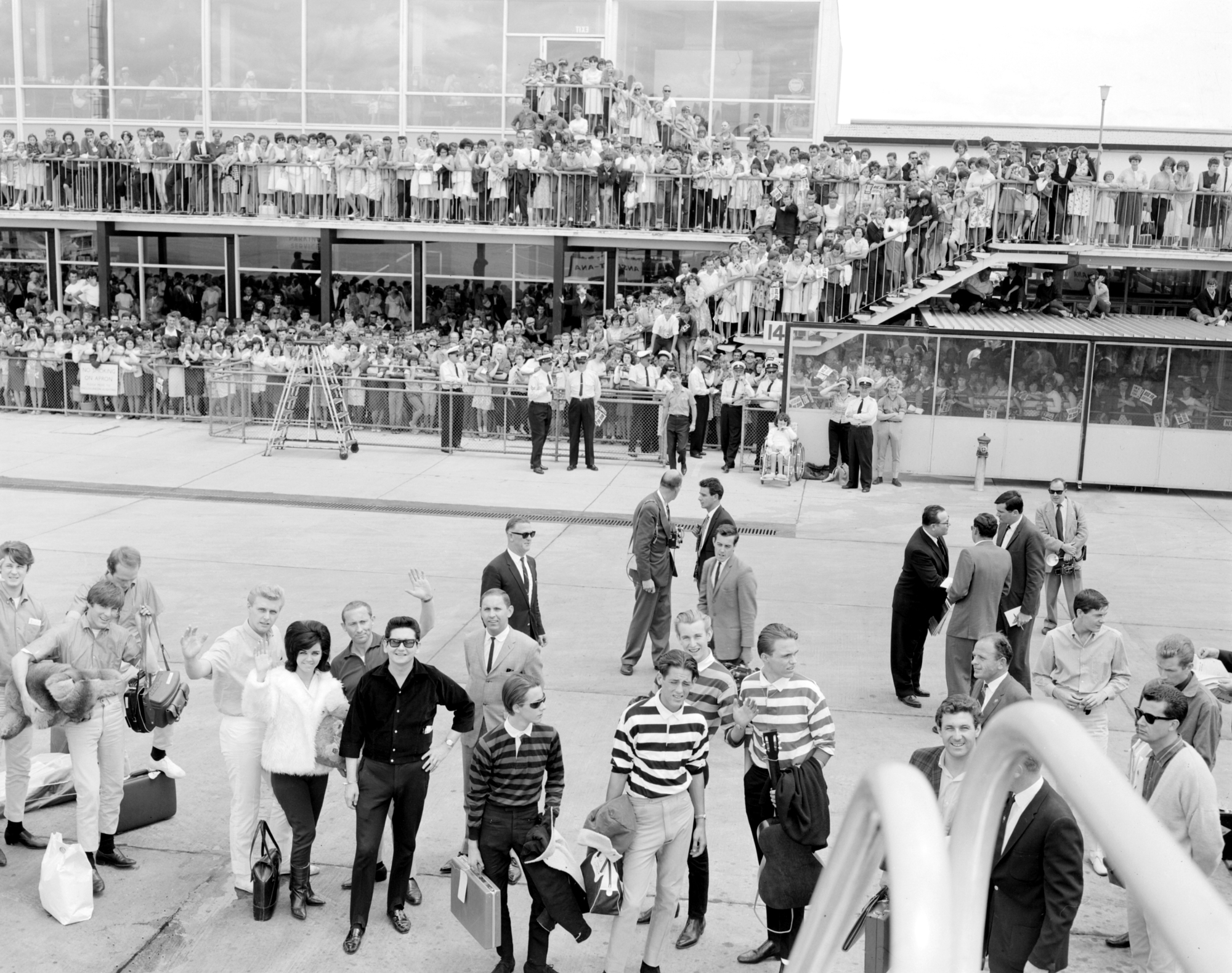 During the late 1960s and 1970s, Australian surfing culture continued to evolve as international surf movies were screened in town halls throughout the suburbs. With the release of the seminal Australian surf movie, Morning of the Earth, the relationship between Australian music and surfing was taken to a whole new level. The film featured not only local surfing philosophy, locations and surfers but a soundtrack of songs from local Australian musicians Brian Cadd, Mike Rudd, John J Francis, G Wayne Thomas and Taman Shud. 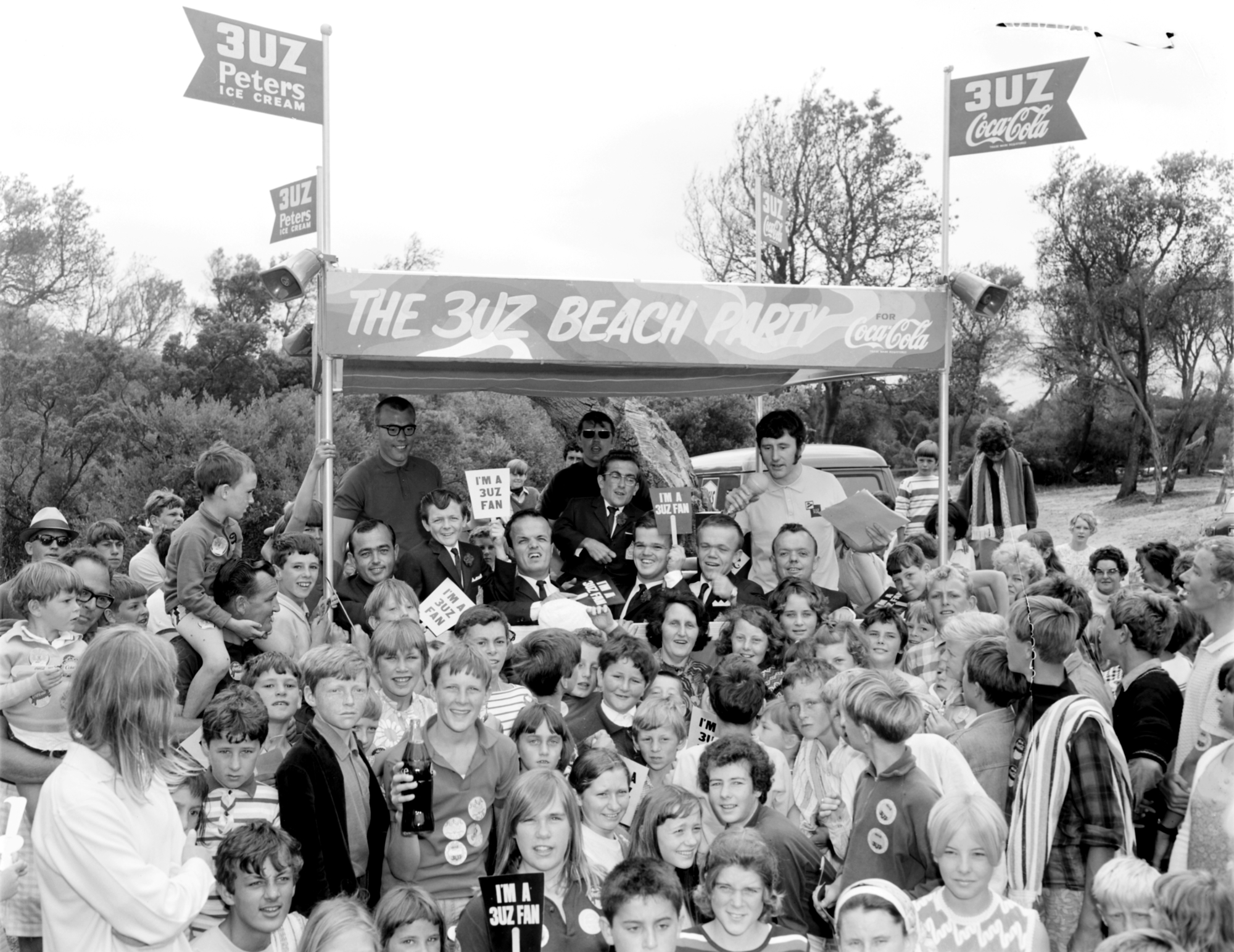 The laid back alternative lifestyle that surfing offered provided an accessible contrast to the bustling and crowded suburban communities of our bigger towns and cities. There was a ‘look’ and an attitude that one could adopt to identify with our surf culture even if you did not actually go surfing. Local businesses such as Rip Curl, Quiksilver and Billabong began journeys that would see all three become global brands providing equipment, clothing and accessories for surfers.

The growth of Australian surf culture in the 1970s was mirrored by the growth in our Australian music industry. The establishment of local record labels such as Festival and Mushroom, local music festivals such as Sunbury, and the launch of television program, Countdown saw Australian musicians and their music promoted on an equal footing with their international counterparts. Skyhooks, whose lead singer Graeme ‘Shirley’ Strachan was a surfer from Phillip Island, wrote songs about our local suburbs, while AC/DC, The Angels and Midnight Oil took the hard rocking energy of our suburban pubs to a whole new level.

By the 1980s, the relationship between Australia’s musical and surfing identities was firmly established with many musicians also involved in the surf scene. Australia boasted a number of iconic live music venues in coastal communities and a vibrant east coast touring circuit. Australian surf and beach culture was also reflected in the works of a number of our leading songwriters. It was from a range of these elements that one of Australia’s most unique music and sporting relationships developed.

In the 1980s, Australian Crawl was one of Australia’s biggest bands. A number of band members were from the Mornington Peninsula, growing up close to the surf beaches of Victoria’s east coast and surfing when they could. The band played to ‘bronzed Aussie’ surfing communities and integrated graphic design elements inspired by beach and surf culture into their album covers, posters and merchandise. A number of their songs also reflected these influences. The band’s 1982 album Sons of Beaches featuring the song ‘Daughters of the Northern Coast’, exemplified this relationship. The band toured up and down the east coast of Australia, and played regularly in large ‘beer barns’ from Western Australia to Queensland. Their commercial success, media exposure, image and coastal touring positioned them firmly as one of the country’s leading surf rock bands.

After the release of their No. 1 single, ‘Reckless’ in 1983 Australian Crawl were looking for different ways to further market and promote themselves to local and overseas music fans. International exposure was important at this time as the band had recently signed with Geffen Records in America and had toured with British new wave band, Duran Duran in the UK.

By 1984, Australia had become a destination for the global surfing community, and Australian surfers were firmly established on the world stage. Newcastle surfer Mark Richards had won four World Surfing titles and Simon Anderson had revolutionized surfboard design with his tri fin ‘thruster’ technology. His victory riding a ‘thruster’ in the giant waves at the 1981 Rip Curl Pro changed the face of surfing.

Rip Curl had developed from humble beginnings making wetsuits in Torquay on Victoria’s west coast to become a global surf business. From 1973 onwards, they sponsored the Rip Curl Pro Surfing Competition held every Easter just down the road from Torquay at Bells Beach. Established in 1961 as the Bells Beach Surf Classic, the competition attracted the world’s best surfers including a healthy number of Australians. In later years it became a part of the World Surfing Tour, proudly recognized as the longest running and most prestigious surfing competition in the world. Its connection with Australian music culture was cemented at the legendary 1981 Rip Curl Pro when it was decided that the classic AC/DC song ‘Hells Bells’ was to be played every morning before the first competition.

But by late 1983, surfing, like many other professional international sports, was becoming increasingly expensive to stage at the elite level. Higher operating costs and prize money meant that the Rip Curl Pro needed more corporate sponsorship to be financially viable. The organizers wanted a brand that had credibility within the surfing community and were reticent to get beer brands on board. Rip Curl continued to support the event but without a suitable co-sponsor there was a genuine risk that the fixture could be replaced by a proposed surfing competition in Japan that was offering more prize money.

Australian Crawl’s management understood surf culture. They had connections with the Victorian surfing community and Rip Curl. After becoming aware of the need for a sponsor for the Rip Curl Pro they looked at the opportunity and felt it was a good fit with their local and international goals. Soon after they sat down with the competition organizers and Rip Curl and worked out a deal.

On Good Friday that year the band filmed a new video clip for their first hit single, ’The Boys Light Up’ at the Torquay Hotel. They also headlined the event’s presentation night playing to a packed house of the world’s top surfers. The first band in the world to sponsor a professional surfing competition, Australian Crawl closed out the official proceedings with a classic set of ‘surf rock’ songs that nearly took the roof off the Torquay Hotel. The band returned to sponsor the event again in 1985 before breaking up in 1986. 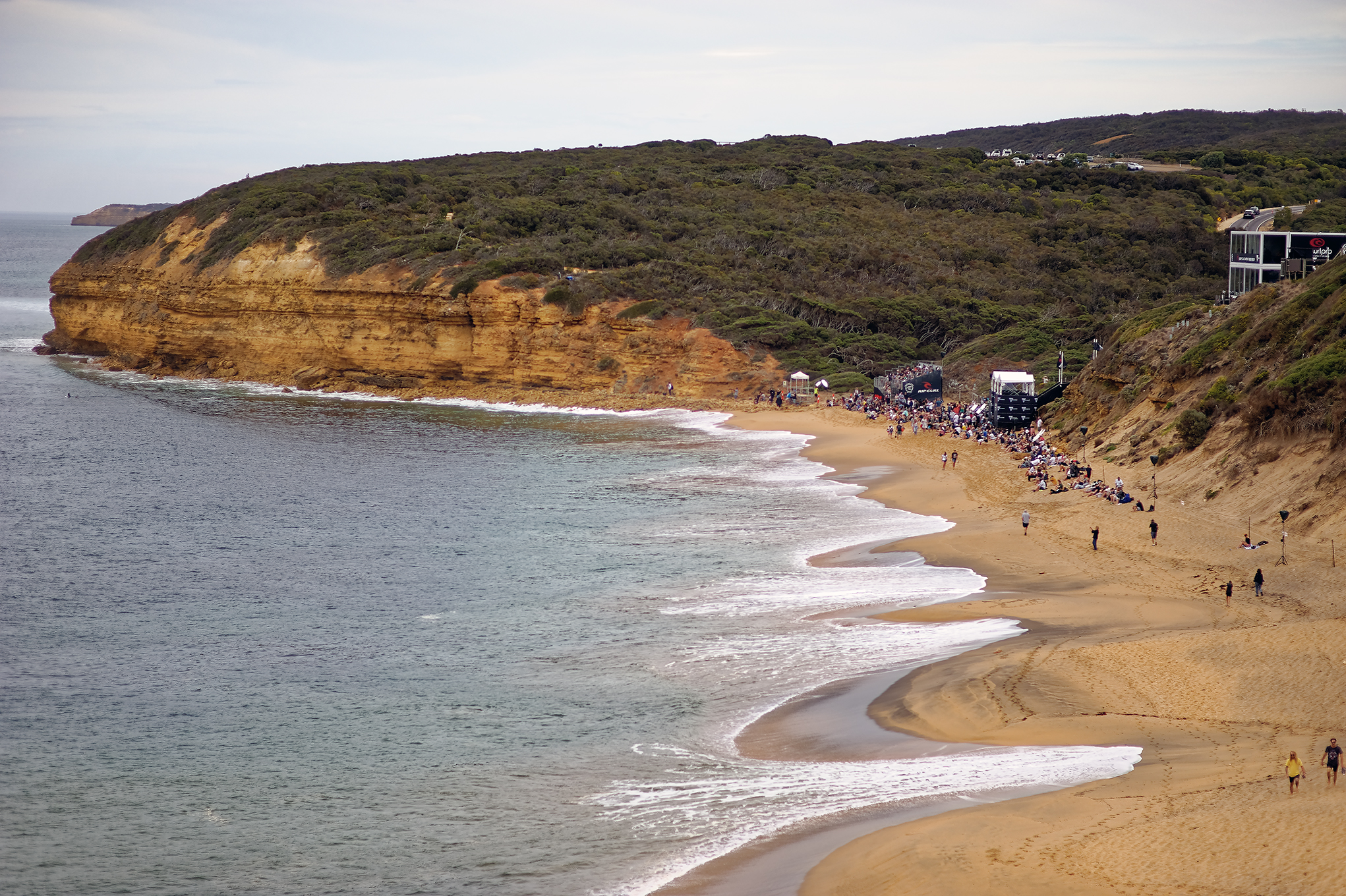 
Have a listen to the AMV Soundtrack for Surfing playlist below: