Broadcaster and mother Jane Gazzo continues her series asking women to describe their triumphs and challenges as working mothers in the Australian music industry.

Emma’s childhood was spent in Sydney and parts of NSW (including Nambucca Heads and Wollongong) as well as Western Australia with the Yamatji people who are part of her paternal family.

She recently relocated to Melbourne and is a proud single mother of two daughters, aged 2 and 4.

What is your earliest musical memory?

I grew up in a large musical family. My mother had five brothers and she was always encouraging me to sing.

She would take me to the Tamworth Country Music Festival each year to perform in the singing eisteddfods. I’d be dressed head-to-toe in a cowgirl outfit she’d made by hand.

We did all the country music circuits those days and got to know many of the other performers such as the McClymont sisters who were very well known in Tamworth. Brooke McClymont and I were around the same age so we’d usually be competing in the same heats.

Our mother’s actually became friends and back then they would swap and share stage outfits for us. Mum was always sewing my costumes. She loved country music and I would always joke that she wanted me to be a black Tammy Wynette!

With my own pocket money I think it would have been something like Brandi, Lauryn Hill or Mariah Carey. I do remember my Nan buying me Ruby Hunter’s (1995) album Thoughts Within and I loved it. Nan had got it signed by Auntie Ruby and Uncle Archie [Roach] and we listened to that record a lot.

First concert you went to?

I went to see Randy Travis perform when I was really young but the first proper concert I remember was Yothu Yindi performing at the Perth Entertainment Centre. It stands out to me because when the curtains opened, a flag was dropped down across the stage. It had the Aboriginal flag where the Union Jack should have been and the Southern Cross stars – their interpretation of an Australian flag. That powerful image has stayed with me.

What were your mother’s morals and values?

When my maternal grandmother passed away at quite a young age, my mum became the matriarch of our very large family. She had strong morals and family values that she passed down from her mother to my brother and I, and our cousins.

My mother felt it was important to keep up the traditions that my Nan had started. Nan was the self-appointed cook of the community in Nambucca Heads. She was always gathering mob together and cooking for everybody: roasts, soups, stews, damper. Especially on occasions such as the birth of a new baby or a funeral. The family home was open to everyone and all were welcome. Mum carried this on as well as her love for music. There was always music playing in our house.

Do you have an example of her displaying these strong morals from when you grew up?

Well, my Nan taught me a lesson when I was younger that I’ll never forget.

One time I was walking with my brother and our cousins across the local footy oval. We saw a storage shed open and decided to go and raid it. There were basket balls, sports equipment and cans of drink and we grabbed what we could and ran out of there.

Nan hit the roof when we got home. She wasn’t worried about my cousins it was more my brother and I as we were her daughter’s children. She made us return everything and marched us down to the owner’s house to apologize.

She offered to clean this old fellas house to make up for our trouble. She was a scary woman and she taught me a very valuable lesson about respect that day.

Was there a time when you and your mother didn’t see eye to eye?

I wasn’t really rebellious as a teenager, but if things got a bit heated I’d run off to another aunties house for a bit until mum and I both cooled down. I’d also stay out late and go and hang out with my older cousins but it would get always back to my mum. Bottom line was Mum found out about everything I did so there wasn’t much that I could get away with.

What teachings/values/morals from your mother have you taken and/or implemented into your own family?

Having an open home and being close to all my cousins and all their kids is very important to me.

It was hard to move back to Melbourne because I don’t have family here so I hung on in Sydney so my kids could have that important family relationship with their cousins.

However, I do have really good friends here in Melbourne including my band The Putbacks whom I consider family. I needed to move to Melbourne to give my career the best possible chance.

There was a time when I did get embarrassed about singing. My mum pushed me a bit and there were times when she’d make all these stage outfits and they’d be decked out with tassels, diamantes and all sorts of rhinestones. I also had a really big afro. Mum would put a cowboy hat on my head to try and tame my hair it but would never sit properly. My hair would usually take on the shape of the hat!

When did you know you wanted to work/be part of the music industry?

The first time I started working with the Black Arm Band was around 2006. I was getting regular singing work around my other day-jobs but I remember thinking I could make this work. There was lots of touring around the country but it also brought a lot of confidence out of me.

Were there any female mentors you felt you could call upon when you started out or did you have to navigate your own path?

I was very lucky in the Black Arm Band in that I had a lot of women I felt I could look up to. Aunty Lou Bennett took me under her wing. I knew her from a very young age and she always gave me really good advice about work ethic. There were other great women there also; it was a great training ground.

Did you always know you wanted children?

Yes, but I never thought it would happen! I am the last out of all my cousins to have kids. I held off for such a long time. When I had my first daughter in my late 30’s, I remember thinking to myself, ‘What was I waiting for all this time?’

Did you worry about how you would make motherhood and the music industry work?

Yes, and the hardest part is finding support for single mums around the music industry. My manager Ali Webb is also a single mum and I feel like we have a really good connection because she knows what it takes for me to get out the door every day with two kids. There’s times when I’ve had the ‘Mum Guilts’ because I’ve had to get babysitters a few times during the week or there’s times when my girls have really needed me. I’ve had to say no to a few things just to ensure I spend that quality time with my girls.

Was there a time when it fell apart? Or felt like it was going to?

Losing my mother three years ago to cancer was really tough. I always get upset when I think about this, but I always pictured her there for me. I had visions of her standing side of stage with my daughters whilst I performed or babysitting them at home. That’s been one of the hardest things for me. Her passing was such a massive loss.

As a single mother, there is an expectation in society and/or the workplace that you just have to get on with it and deliver. What kind of pressure does this place on you? How have you managed to navigate this in this past?

I work around my girls. If there’s things I can’t do, then I can’t do them.

I have had to bring them to work with me when I couldn’t find a babysitter or when they are sick. Maybe I have pressured myself in the past but I’m getting better at saying no!

Since my second child I’ve realised what I need to do to be a good mother and be happy; that’s part of the reason why I moved back to Melbourne. I feel I belong here musically and that I can provide for my girls here. I went to a rehearsal the other day at Arts Centre Melbourne and two women were singing backing vocals on stage and they had their babies in slings whilst rehearsing. It was just wonderful to see. There was also space backstage for my girls to sit and draw and hang out. It meant a lot to me because not everyone can take their kids to work but for me personally, I think it’s important for my kids to see me in these creative spaces. A lot of festivals are now including these spaces for children backstage. That’s important to me as a single mum.

Since having your children, what has been your proudest moment?

My most current album with The Putbacks (Crossover) was nominated for the Australian Music Prize earlier this year. I was very proud of that. It’s always a relief when you finish an album but we put a lot into that one so it felt really good to have it recognized.

I poured a lot of my grief about my mother into Crossover. It was a funny time for me when I was writing it. I was my mother’s primary care giver and that’s where the all the lyrics and strength came from. I put it all into my music and I think a lot of people could relate.

What do you do to take time out for yourself?

My time out for myself is my gigs. There’s otherwise very little time for myself! (laughs) Because I am creatively fulfilled, I am a better mother and the kids feel it. They know.

Best piece of advice given to you?

My mum would always tell me to stay humble and an Auntie once told me, ‘Always trust yourself’. 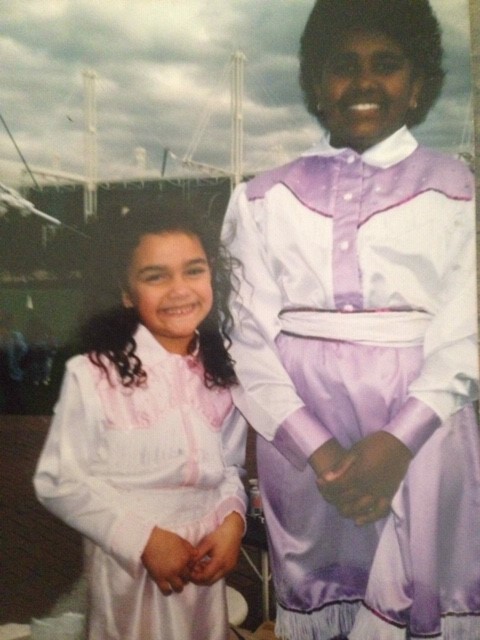 Emma with her mother backstage at the Tamworth Country Music Festival, late 1980s.

Jane Gazzo
Jane Gazzo is a broadcaster, TV presenter, music journalist and published author who began her career in radio, aged 16. Since then, she has presented nationally on Triple M and Triple J as well as BBC Radio 6 in the UK and has hosted television shows such as Recovery on ABC TV. She spent eight years as a presenter on Foxtel's Channel V, where she reported from music festivals, red carpet events and hosted live TV shows, interviewing some of the biggest and best names in the music world.

In 2018 Jane became Chair of the Australian Music Vault Advisory Group and in 2020 she hosted ABC-TV's flagship music show THE SOUND and co-founded the popular Facebook site Sound As Ever (Australia Indie 90-99).