The Lost Songs of David McComb

For many, McComb’s lyrics represented a small measure of comfort for the heartbroken, or guidance for those lost in isolated spaces.

McComb’s songwriting was sophisticated and poetic. Buoyed by the love of Leonard Cohen and Bob Dylan but twisting his own post-punk and pop influences, the music he made with The Triffids some thirty years ago continues to inspire, influence and remain relevant, even in the digital age of streaming.

The Triffids steadily built a cult following through the 1980s, with the adored Born Sandy Devotional, a timeless album heavy with nature, remoteness, and foreboding. It contains their classic ‘Wide Open Road’, which reached the UK Top 30 in 1986 and has become even more cherished in the years since. It perennially appears in polls and tastemakers’ lists whenever the Australian sound or significant songs of our era are mentioned.

In England, where they spent much of their time, the band was critically acclaimed by the British music press and they earned a loyal following across Europe.

Triffids guitarist Robert McComb describes his brother’s passing as ‘everyone’s tragedy’, such was the reverberation that shook him and all who loved David.

‘You can grieve but you never get over it,’ he says softly. 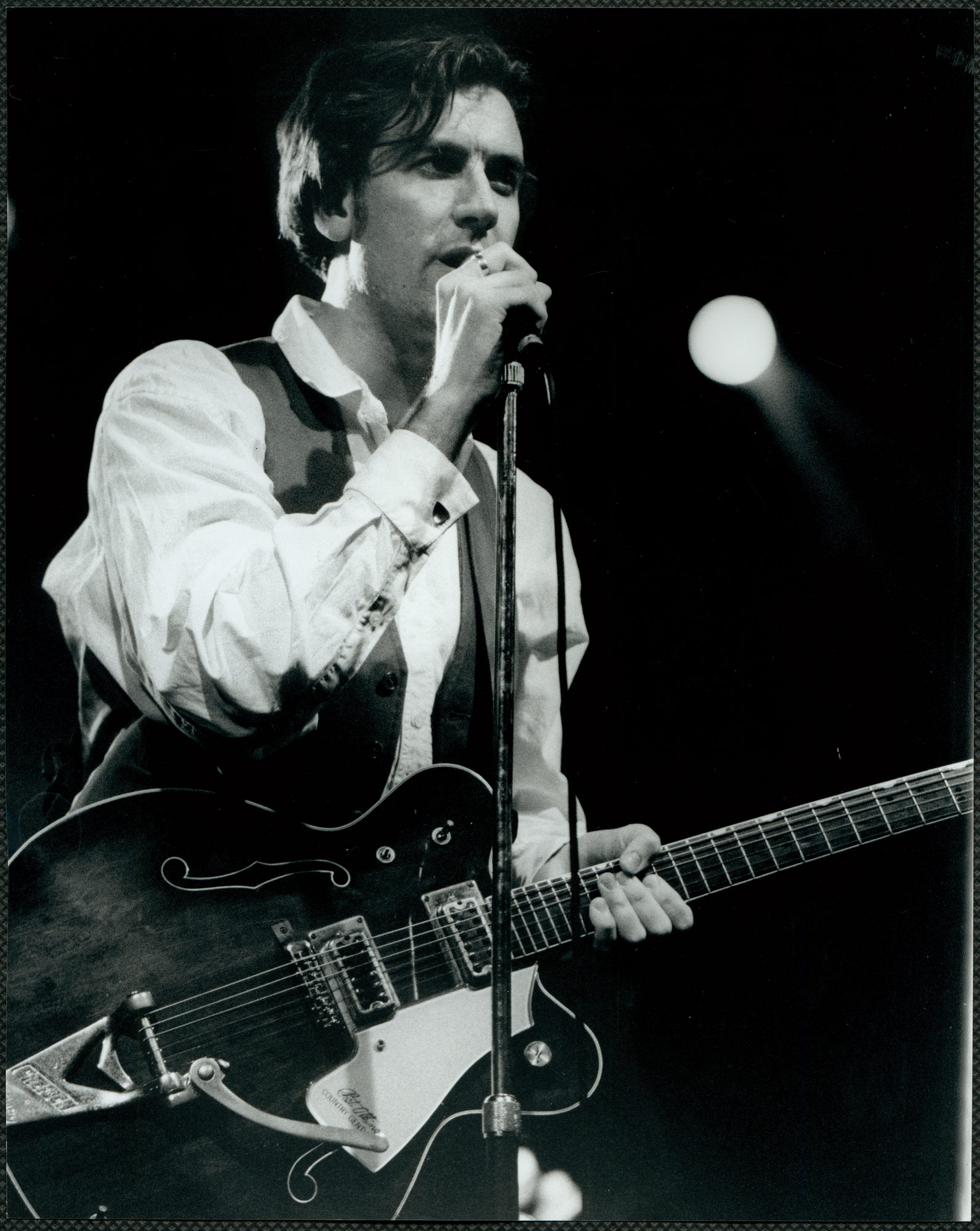 Over the past couple of years Robert and a number of close friends have been bringing to life a treasure trove of superb unreleased material. The songs were recorded over a couple of summers by an assemblage of musicians including members of The Triffids, The Blackeyed Susans and people who had shared a stage and other delights with the man himself, along with musicians who knew him and loved him through his music.

Most of the songs were demo’d in the 1990s by David and had been left lying around on cassettes. Trusted long-time friends ‘Evil’ Graham Lee (Triffids) and Phil Kakulas (Blackeyed Susans/Triffids) were also involved.

There is something seductive about the humble audio cassette. The clunk and rattle as it settles into the player; the hiss as the tape winds its way around the heads. For Graham Lee, listening to the captivating audio was a way back to David - back to a snapshot or a moment time.

‘Many of the tapes were rough, with Dave strumming away on the electric guitar and pressing record,’ says Lee. ‘Then, there’d be things like just the strum of a bass line or him just saying random words.’

Sometimes, the din of the late night television could be heard in the background or the occasional dog barking. Many of the tapes had David’s familiar scrawl emblazoned on the outside, indicating ‘new songs’. For Lee, it was clear that the versions David left behind were the ones he was happiest with. He’d recorded over any previous takes.

Truckload of Sky was never intended to be an album. Initially the idea was to garner a keepsake of David’s lost songs. However, it was soon apparent they were too good to keep for a selected few.

Lee assembled a core band of luminaries including Mark Dawson on drums, Phil Kakulas on bass, JP Shilo on guitar as well as David’s older brother Robert on rhythm guitar – their closest collaborators and friends.

‘Most of us have played together for more than thirty years,’ Lee says of his fellow band mates, ‘and we found the songs came together quickly.’ 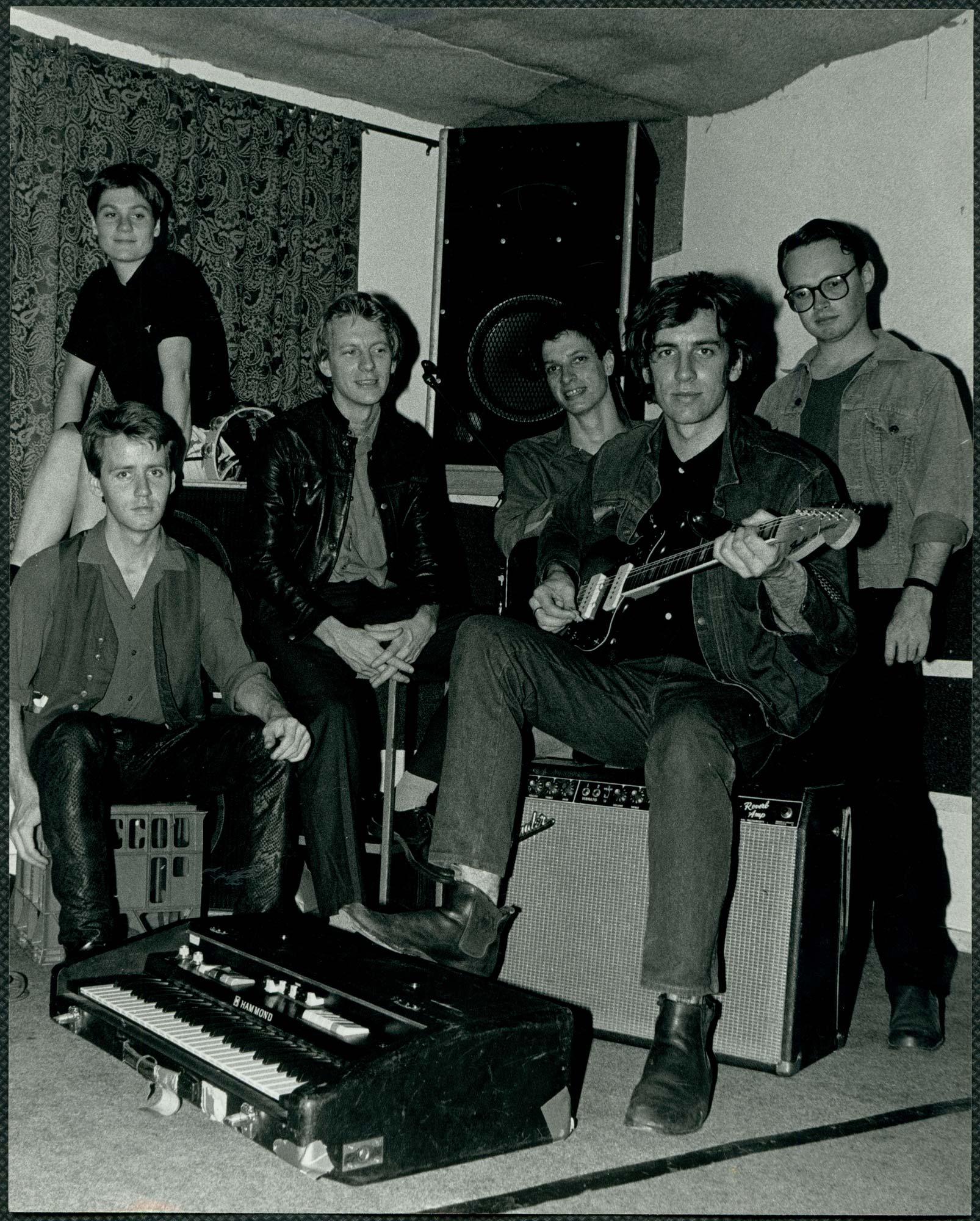 An array of talented vocalists were then chosen to sing. Chosen mainly on the criteria that they were enthusiastic and available, including Rob Snarski, Angie Hart, Romy Vega and Alex Gow. It is clear on first listening to Truckload of Sky, that every singer brings their own elucidation of the late David McComb. The songs are brought to life with passion, emotion and the prose McComb was renowned for; almost reinvigorating his post-Triffid’s career.

They say bygones should be bygones,
Judge not least you shall be judged
But you forget what I remember,
Yeah I’m the type that bears a grudge

Childhood friend and former Triffid, Phil Kakulas was a co-producer. It was a task he found both daunting and joyful.

‘I did feel pressure and responsibility to not f**k the songs up,’ he says matter-of-factly of his time in the studio. ‘I know there were occasions when people would say, “What would Dave do?” and I always appreciated that, but we had to adhere to Dave’s own rule that the song always comes first. I’d like to think if we did that, it would have made Dave happy.’ 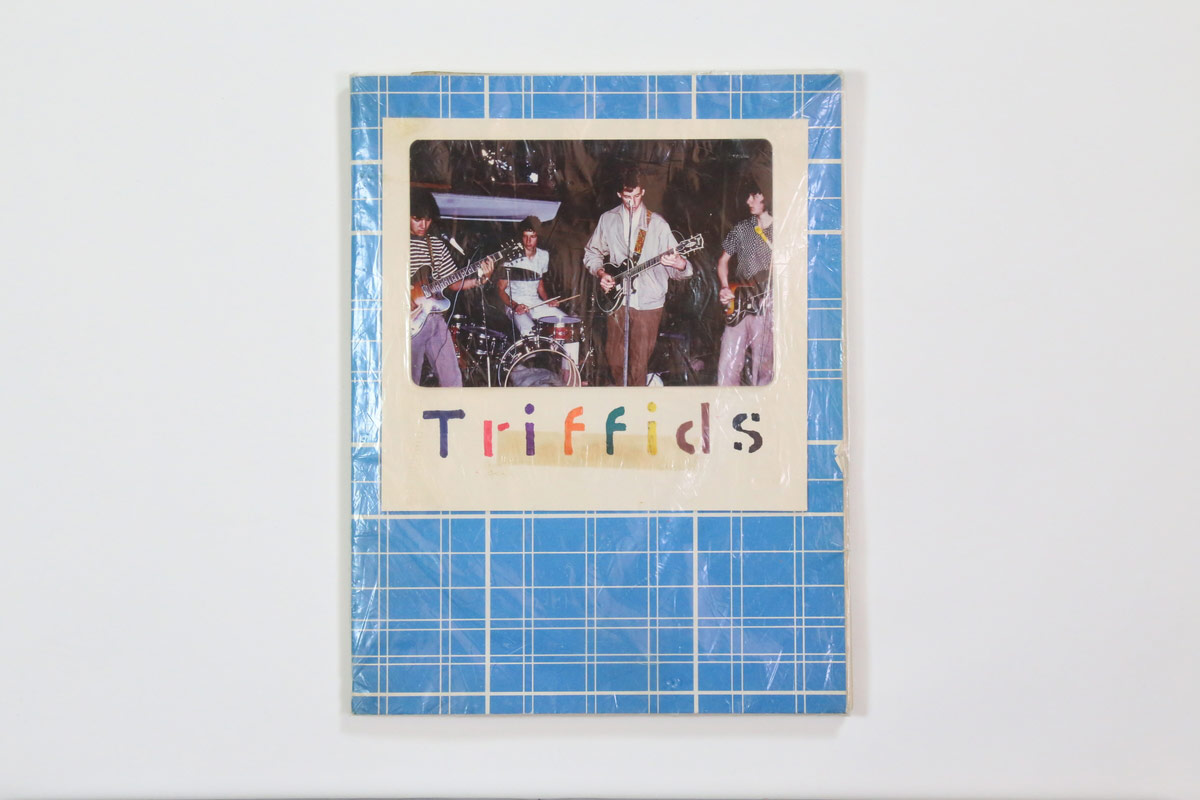 Notebook by David McComb. Courtesy of the Estate of David Richard McComb.

When talking about the work of The Triffids, McComb’s lyrics are generally grounded in the landscape of Western Australia, whilst being universal in their reach.

However, in 1996, three years before his death, McComb underwent a heart transplant after developing cardiomyopathy. Truckload of Sky features a number of songs written after the operation, which head off into a more personal direction and contain a deeper sense of gravitas than his previous work.

Songs like ‘Lucky For Some’ paint a picture of the late McComb helpless in a hospital bed, (I heard your steps on the hospital tiles and the thought of your arms around me kept me warm for a while’) whilst in ‘Look Out for Yourself’, McComb asks “Tell me do you see someone else, and if there’s someone you can turn to now, in your sickness and your health.’

‘Dave was definitely the dedicated songwriter,’ says Graham Lee. ‘He’d fill endless notebooks with words and rhymes and various lyric ideas and spend a long time refining things. Lucky for us, even on the cassettes, most of the forms are good and workable and intact. There’s very little work we had to do in that respect. We just had to dress them really.’ 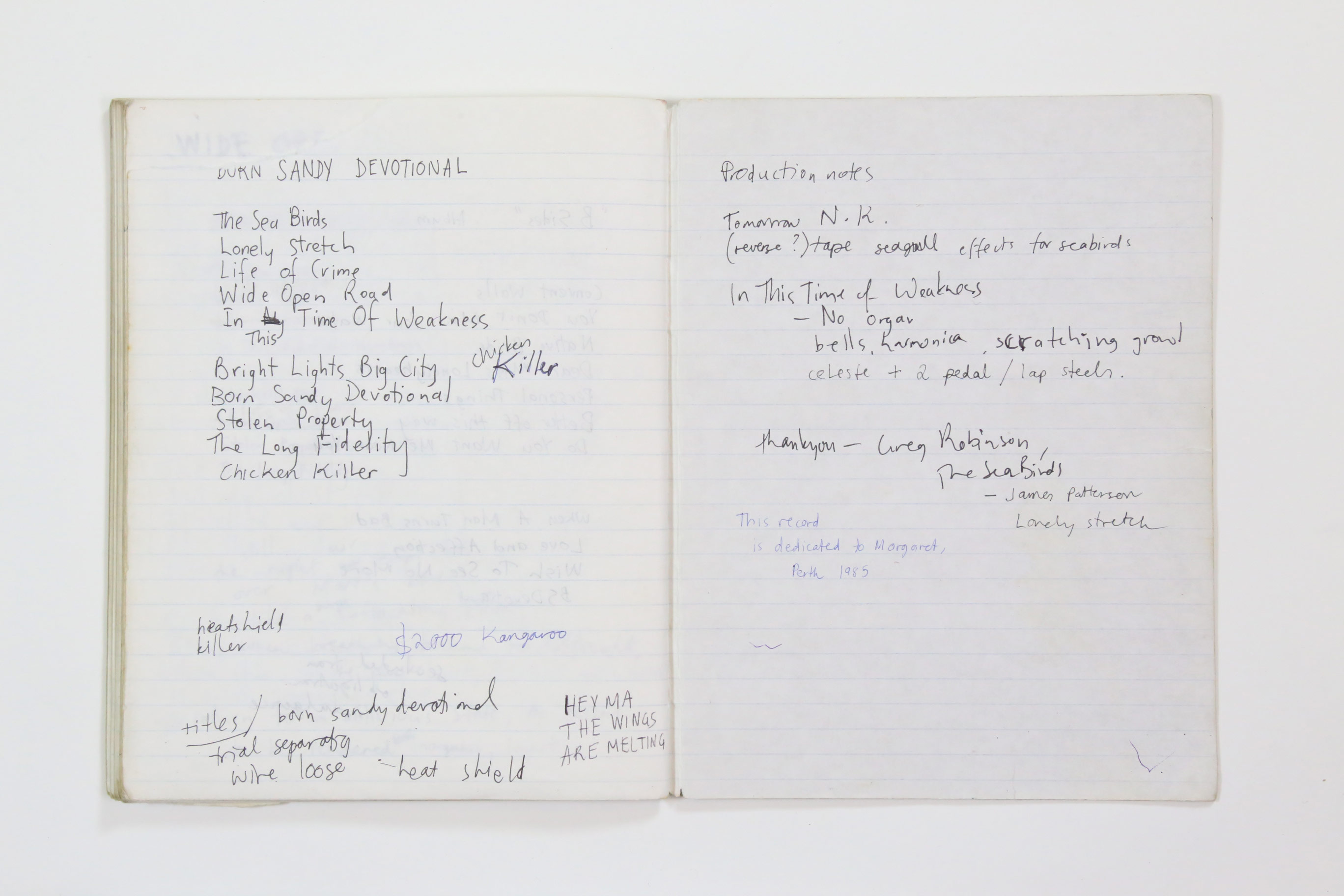 Notebook by David McComb. Courtesy of the Estate of David Richard McComb.

Meanwhile, Phil Kakulas felt working on Truckload of Sky brought about a closeness to his childhood friend he’d not experienced before. ‘It wasn’t like he was in the room, but it did feel like we were making music with Dave again through his words and cassettes, which is something I thought was never going to happen.

‘Just being able to work on those songs…it kinda brought him closer to me in a way that I hadn’t felt for quite a while. It was a real honour to be able to do that.’

Kakulas recounts personal stories of mucking about with David when they were kids of 10 or 11 in Perth. Of Sunday afternoon’s eating Mrs McComb’s fantastic roast beef around the kitchen table and of sneaking into clubs with Dave as teenagers to watch Kim Salmon perform in his band the Cheap Nasties. His friend’s death at just 36, had an impact on him.

‘I remember writing the obituary for The Age newspaper with Graham and Rob (Snarski) and thinking it was one of the hardest things I’ve ever had to do.’

‘Steve had been trying to reach me all day, but I was on my computer. It was back in the days when we had dial-up modems so he couldn’t get through to me.’

When Lee saw Miller on his doorstep holding a six pack of beer, he knew why he was there.

I think about Dave every day," Lee admits. "He was such a big part of my life.

Truckload of Sky is an amazing chronicle – a collection of songs with the unmistakable intelligence, literary clout and atmospheric arrangements that fans associate with The Triffids.

‘This is how we remember David,’ says Rob McComb, proud to help preserve his late brother’s legacy.

It’s a fitting body of work to add to David McComb’s canon - and a serendipitous find for those still seeking solace from a talent lost too soon.

Jane Gazzo is a broadcaster, TV presenter, music journalist and published author who began her career in radio, aged 16. Since then, she has presented nationally on Triple M and Triple J as well as BBC Radio 6 in the UK and has hosted television shows such as Recovery on ABC TV. She spent eight years as a presenter on Foxtel's Channel V, where she reported from music festivals, red carpet events and hosted live TV shows, interviewing some of the biggest and best names in the music world.

Jane is chair of the Australian Music Vault Hall of Fame advisory committee and serves on the board for government youth organisation The Push. Her first book, John Farnham - The Untold Story was published in 2015.