The RocKwiz team was due to return to Arts Centre Melbourne for their annual RocKwiz’s Really Really Good Friday show this Easter before events surrounding the global COVID-19 crisis sadly forced the centre to temporarily close its doors to the public. Here, Jane Gazzo speaks to executive producer, Ken Connor about the secret to RocKwiz’s ongoing popularity with both audiences and performers.

Connor is the executive producer of RocKwiz and has high hopes that the Rolling Stones’ guitarist might one day appear on their set.

‘I’d love to have him as a guest. If he were coherent of course.’

RocKwiz is considered a trailblazer in the Australian television landscape and one of the few shows which has worked both as a live production, as well as on the small screen. Whether it is performed at the mammoth Sidney Myer Music Bowl or the intimate setting of Hamer Hall, the comedy and musical charm are never lost. 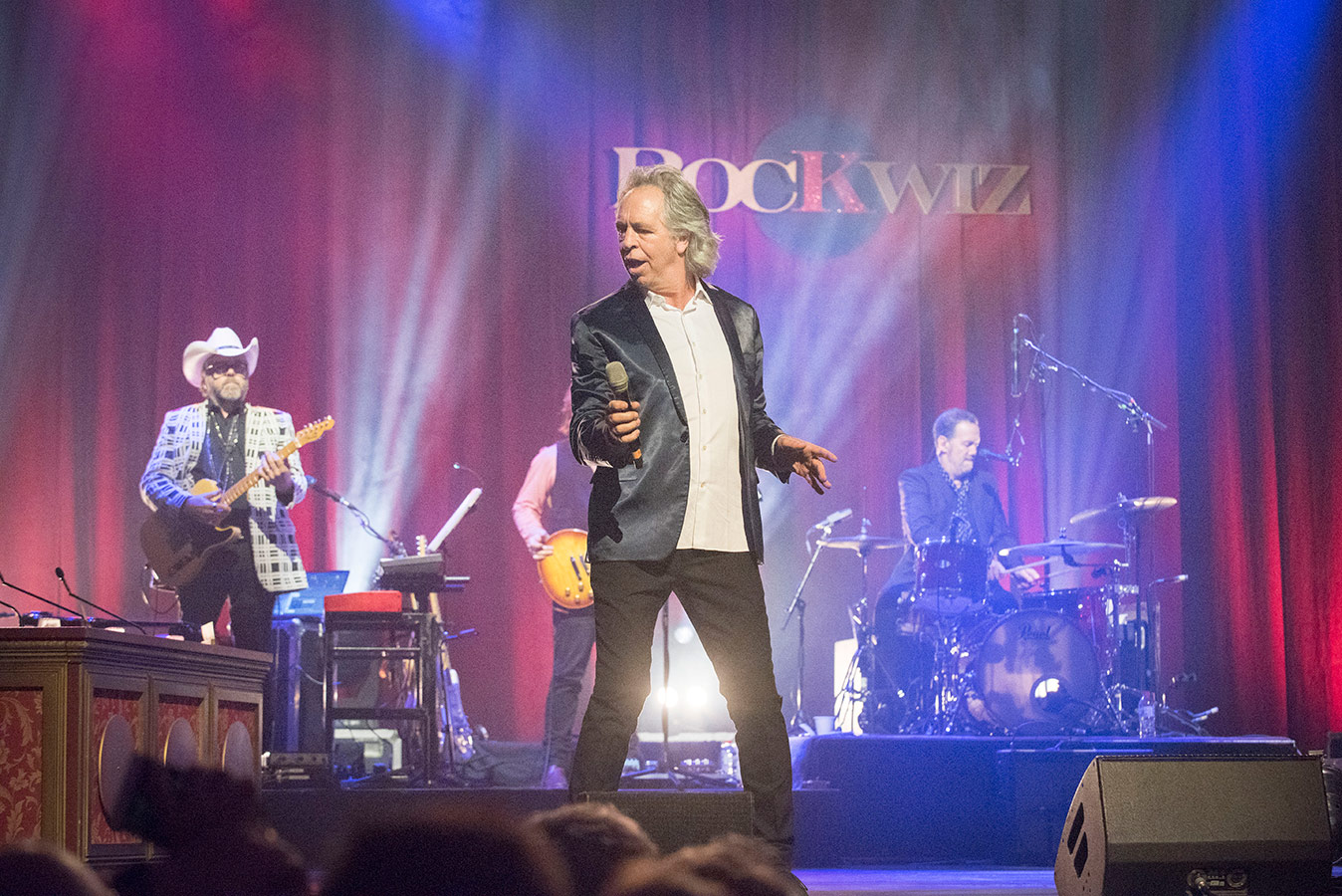 Brian Nakervis and the RocKwiz Orkestra on stage. Photograph courtesy of Renegade.

Connor has been involved with RocKwiz, both the television and live theatre shows, since its inception in 2005. It was the brainchild of host Brian Nankervis, Connor and TV producer Peter Bain-Hogg.

‘The show was actually kicking around prior to 2005 but it got turned down a few times. The ABC also said no to it but thankfully it got picked up by SBS and took off.’

And take off it did, becoming appointment viewing every Saturday night for music fans around the country. The dynamic combination of hosts Brian Nankervis, Julia Zemiro and Dugald “The Roadie” McAndrew quickly garnered them a loyal and devoted audience. This coupled with the musical talents of their weekly guest artists and the RocKwiz Orkestra made it a recipe for some of TV’s most memorable musical moments. Connor struggles to come up with his favourite.

‘There are lots of them,’ he laughs. ‘The duets early on in the show, which morphed into the closing number. There’s been so many great guests too. Joe Camilleri, Daryl Braithwaite, Stephen Cummings, Billy Bragg, Rebecca Barnard… But I think the proudest TV moment for me was celebrating 50 years of the Myer Music Bowl for RocKwiz Salutes the Bowl. It was pretty incredible. There were over 10,000 people there that day and we were able to bring Judith Durham back to sing. It was tremendous.’

Durham’s rendition of The Carnival is Over on RocKwiz Salutes the Bowl, is still talked about to this day.

The singer breathed new life into the well-known Seekers song, in an emotionally charged performance, on the same stage where she had made Australian music history some 42 years earlier. The Seekers 1967 performance at the Sidney Myer Music Bowl still features in the Guinness Book of Records as the largest ever concert attendance in the southern hemisphere. The green dress Durham wore that day became instantly iconic and is now part of the Australian Music Vault at Arts Centre Melbourne.

Moments like these have made RocKwiz a personal joy for Connor. In its early days, he’d never have anticipated it would last the 11 years it aired on SBS. (It was decommissioned in 2019). In comparison, Countdown ran for 13 years and Spicks & Specks just seven – it’s an impressive feat.

‘To see RocKwiz last as long as it did on the screen and to be still producing the live show and to have that connection with the audience who embrace it… There’s nothing like it.’ Connor says.

In fact, the live shows, which have toured around Australia for the past five years, have been a big hit and Connor puts this down to the involvement of the punters and fans.

‘The guests change, but when you get the general public, you really don’t know what’s going to happen. The magic of Brian and Julia interacting with them is what makes it special because it’s always going to be different.’ 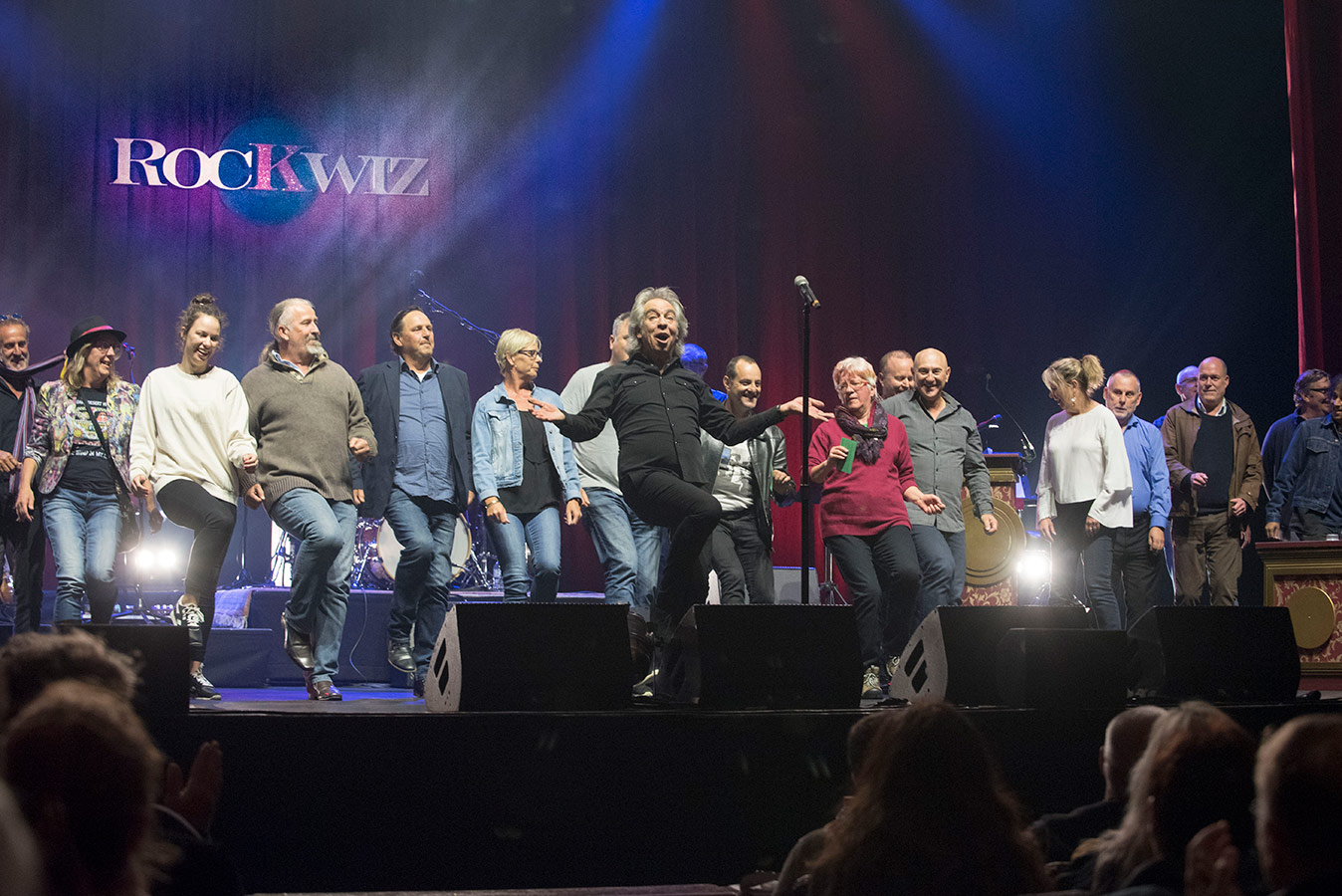 Last year’s Good Friday show at Hamer Hall featured big name guests Ian Moss, Sarah McLeod, Judith Lucy, Vika and Linda Bull. Connor believes these local artists are happy to be part of the live experience because they know the RocKwiz space is a welcoming one. The international artists however, can take a bit more convincing.

‘You tell them what it is and they don’t really understand the concept of the show until they are there on stage. And it’s not until it has gone off the rails and everyone’s rolling about laughing that it clicks and they get it.’

Tony Hadley of Spandau Ballet is one example.

‘He was very serious. He wanted to know how long filming was going to take and what he would be asked and who would be sitting next to him.

Then, if you watch the episode, about four minutes in, his whole demeanor changes. He rolled with the punches and it was really fantastic. When guests know that they’re not going to be shamed or made fun of it becomes really magical.’ 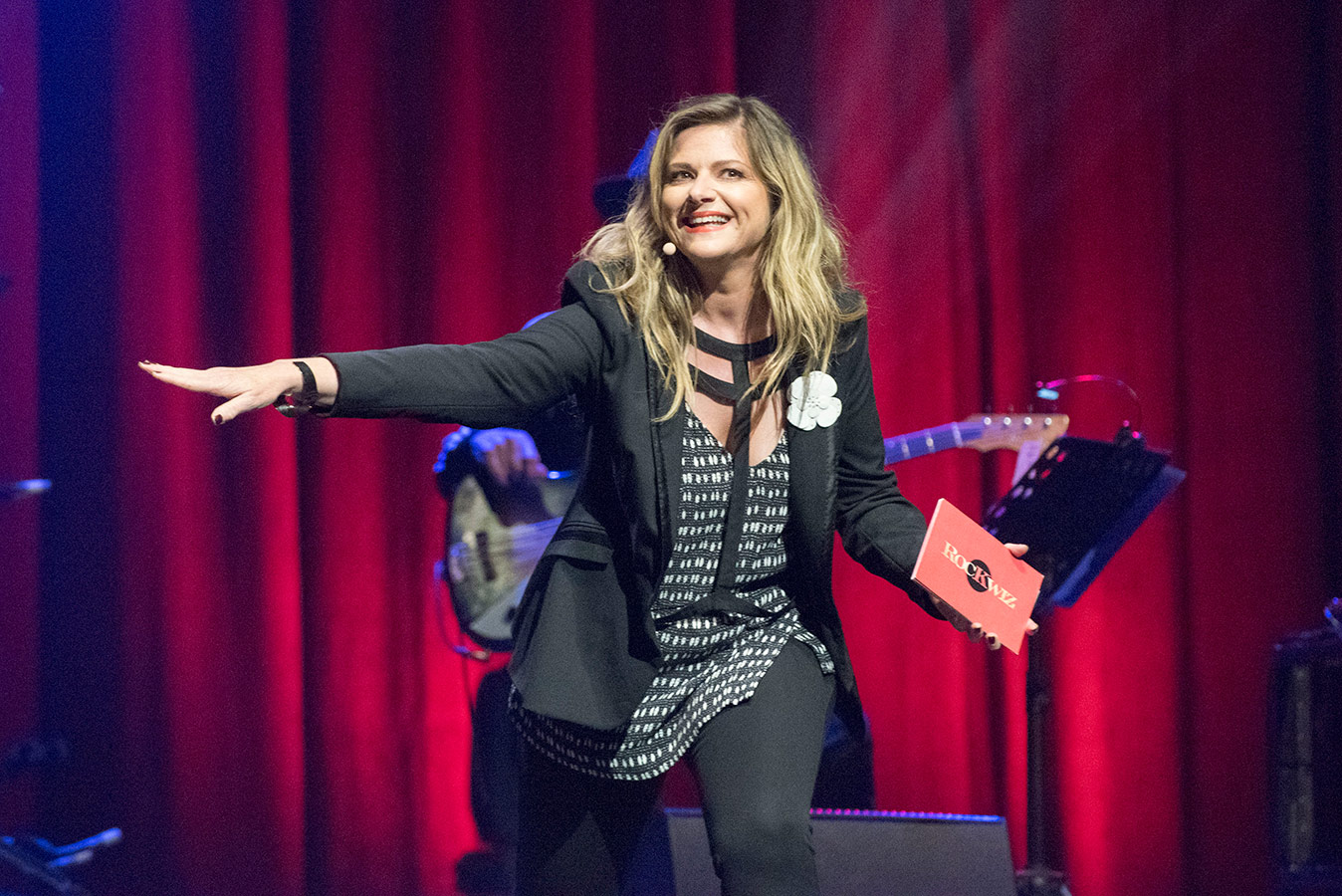 There is a sense from Connor that the RocKwiz crew are a strong unit. Not only do he and his brother Joe run the production, but his children Lilly and Finn both work on the set with a dedicated and loyal team. Then there is the cast whom the public have taken to their hearts.

How did they find the show’s unlikely breakout star, Dugald McAndrew, the roadie?

‘He was a roadie helping out at the Espy,’ laughs Connor. ‘He was on camera a lot in the early episodes and we’d joke that he was the hottest roadie in town. Having him as part of the show worked really well and we couldn’t afford an electronic score board!’

For Ken Connor, those things are important but he places more emphasis on the musical guests who have made the show so impactful.

‘I’d like to think we’ve introduced a young pack of talented people to a television audience. Missy Higgins, Megan Washington, Montaigne… For many, it’s the first time they’ve ever been on the telly. It’s invaluable to see where those artists have come from.’

And what does he hope RocKwiz’s legacy will be?

‘I’d like to think that it is considered a musical vault. A time capsule for a lot of those performers. I hope it will be a great resource at some point.’

Whilst the television show may be no longer in production, both SBS and VICE are re-running the series and there’s no stopping the live theatre show anytime soon. In the meantime, Ken still dreams about having Keith Richards as a future guest.

‘Oh if money and time were no object,’ laughs Connor. ‘Yes, Keith Richards. But I’d be battling with Brian who would want Bob Dylan!’

Jane Gazzo is a broadcaster, TV presenter, music journalist and published author who began her career in radio, aged 16. Since then, she has presented nationally on Triple M and Triple J as well as BBC Radio 6 in the UK and has hosted television shows such as Recovery on ABC TV. She spent eight years as a presenter on Foxtel's Channel V, where she reported from music festivals, red carpet events and hosted live TV shows, interviewing some of the biggest and best names in the music world.

Jane is chair of the Australian Music Vault Hall of Fame advisory committee and serves on the board for government youth organisation The Push. Her first book, John Farnham - The Untold Story was published in 2015.