On the 10th anniversary of the SLAM (Save Live Australia's Music) Rally, Jeff Jenkins looks at the uniquely Melbourne protest movement that continues to shape the city’s live music culture.

In January 2010, Melbourne music fans were awoken from their summer slumber with news that one of the city’s favourite venues, The Tote in Collingwood, was closing.

At the time, most Melbourne gig goers were blissfully unaware that there was much more to the story than The Tote’s closure.

A brief history: 2010 was a state election year. The government, keen to show it was tough on law and order, was enforcing strict liquor licensing regulations which meant that all late-night venues – including music venues – were deemed “high risk”, which meant security guards, CCTV and increased insurance premiums.

Small gigs had become unviable. And the inference was that live music equalled violence, which was not supported by evidence or statistics.

The music industry has a fine tradition of working for social change, with anthems that make people think, including Helen Reddy’s ‘I Am Woman’, Goanna’s ‘Solid Rock’, Midnight Oil’s ‘Beds Are Burning’, Yothu Yindi’s ‘Treaty’, Archie Roach’s ‘Took The Children Away’, Ronnie Burns’ ‘Smiley’, Cold Chisel’s ‘Khe Sanh’, and Redgum’s ‘I Was Only 19’ and ‘Roll It On Robbie’. And events such as 1983’s anti-nuclear concert, Stop The Drop. The EAT Concert, at Melbourne’s Myer Music Bowl, an inspiration for Live Aid, which came seven months later. Midnight Oil playing outside the Exxon building in New York, and wearing their “Sorry” suits at the Sydney Olympics closing ceremony. And 2005’s WaveAid, which followed the Boxing Day tsunami, and 2009’s Sound Relief, which raised money for bushfire and flood victims.

But the SLAM Rally was different. This was fan-led. And it was about your everyday working musician, not chart-topping superstars. It was about live music at your local, with fans rising up and saying:

We love live music and we don’t want to lose it.

This is a story of unintended consequences and people power.

This is our music, they can't shut us down.

As The Tote called last drinks, many Melbourne music fans wondered, “What next?”

“This is our church,” Dan Sultan remarked to friends in The Tote’s beer garden. “It’s like they’re taking our religion away from us.”

The Tote was where Quincy McLean played his first gig with his first band, Scrap Museum, in 1982. Not long after The Tote closed its doors, McLean woke up in the middle of the night. “I’ve got it,” he remarked to his partner, Helen Marcou. “A band going down Swanston Street, re-enacting ‘It’s A Long Way To The Top’.”

McLean and Marcou have some serious cred when it comes to AC/DC – their son’s name is Angus George Malcolm Bonnie-Scott McLean.

McLean – who was also the lead singer of the ARIA-nominated Blue Ruin, who released four studio albums – came up with the name SLAM, an acronym for Save Live Australia’s Music. He and Marcou enlisted an army of volunteers to engineer the SLAM Rally, which happened on February 23, 2010 – the 34th anniversary of AC/DC’s famous clip, which the Countdown crew, led by director Paul Drane, made with a budget of $380.

This time around, with Drane filming on the back of the truck, the band was the RocKwiz Orkestra, with a trio of bagpipe players, including two pipers who were on the original truck with AC/DC. 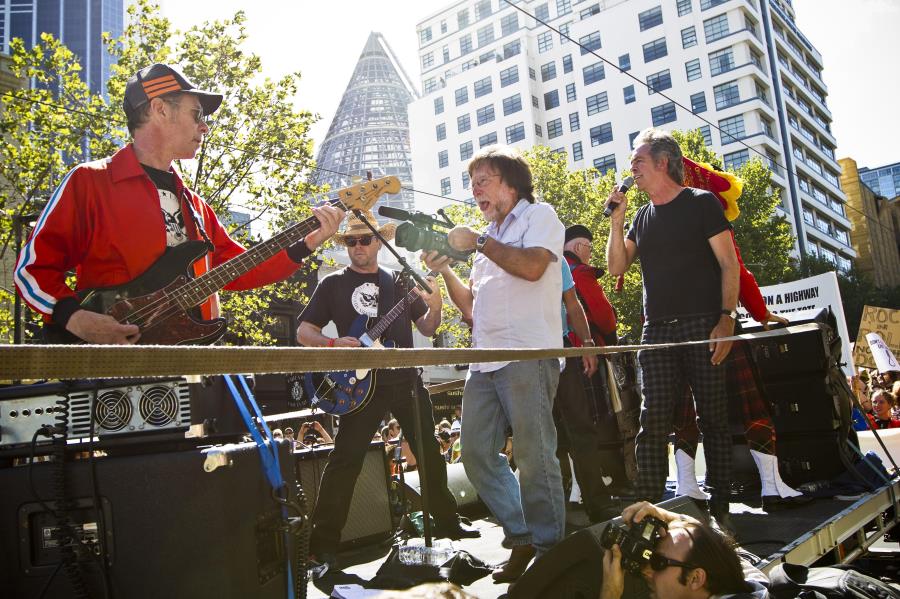 MC Brian Nankervis re-worked the Aussie classic as the crowd – including many musicians marching with their instruments – sang along:

Ridin’ down the highway/ Goin’ to The Tote/ Music ain’t high risk/ The laws have gotta go!

“Do you believe in rock ’n’ roll?” Nankervis asked the masses. “This is our culture,” he continued. “This is our music. They can’t shut us down.”

Nankervis smiles when asked to recall his memories of the day. “A brilliant idea, just one part of a fabulous campaign that galvanised the people of Melbourne – and made a difference. People have the power!”

In the lead-up to the rally, SLAM and another activist group, Fair Go 4 Live Music, and the fledgling Music Victoria mobilised to discuss action plans. They met at the Railway Hotel in North Fitzroy, one of 80 venues forced to reduce or cancel their live music offering.

Curious onlookers and shoppers watched with wonder at one of the biggest commotions the city has ever seen.

Patrick Donovan has a unique perspective – as The Age’s music writer, he covered the rally; a few months later, he became Music Victoria’s founding CEO.

“Curious onlookers and shoppers watched with wonder at one of the biggest commotions the city has ever seen,” Donovan reported. The crowd – which Donovan said was a mix of “all sizes, from babies in prams to grandparents” – brandished signs including:

“No music, no Melbourne.”

“Hey Mr Brumby! It’s a long way from the top if you bury Rock n Roll!”

“It was complete pandemonium,” Donovan recalls. “No one could believe the size of the crowd. It energised the protesters – who were really pissed off, but also thrilled to be singing along to AC/DC – confused the bystanders and scared the hell out of the government ministers and advisors. I’ll never forget the pride I felt for the music community, and the sense of belonging. It galvanised the community, put music on the political map, and that provided a solid foundation for Music Victoria to leverage off.”

Paul Kelly told the crowd that small venues “were my university” – a quote that Michael Gudinski is fond of repeating. The Mushroom Group founder has also called the SLAM Rally one of his proudest days as a Melburnian. 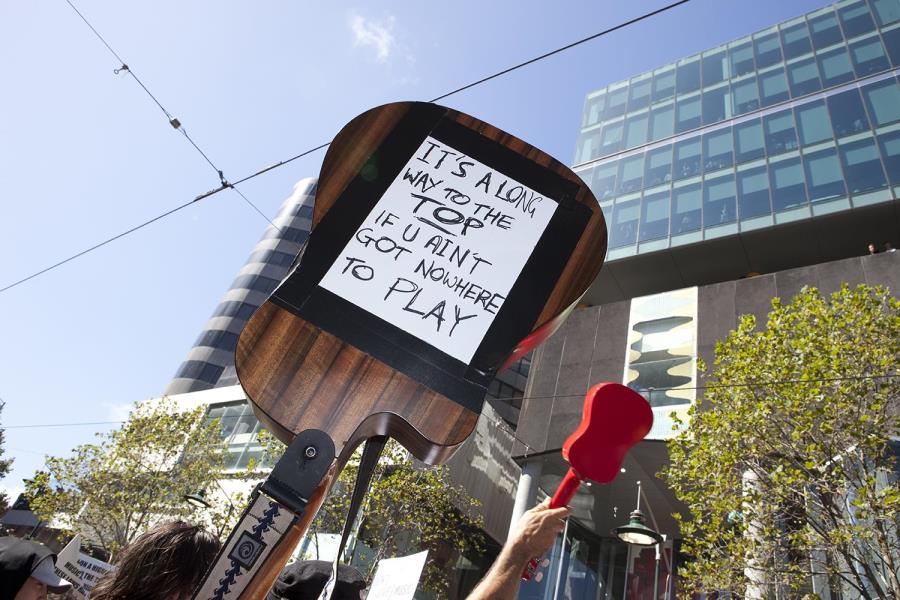 One of Kelly’s contemporaries, Stephen Cummings, provided a contrary view on social media. “The Tote closed, and this begat much gnashing of teeth from the music industry and inner-city crowd,” the former Sports singer wrote after the rally.

“The Tote has cultural cache, an ideological line for some people. The demonstrations, the righteous anger; I know this is the age of conspicuous self-interest, but what about global conflicts and a wholesale banking collapse? Not important!"

“The hot topic on the social sites and newspapers were that a pub was closing down. The original discussion about licensing laws legislation was lost in hysteria and nostalgia. It all became about The Tote and the rally more like a promotion for RocKwiz than licensing legislation. Gigs should start earlier.

“The Tote was a pub,” Cummings concluded. “Pubs open and shut every week.”

But The Tote closure was the flashpoint for what became the largest cultural protest in Australia’s history, with an estimated 20,000 people filling the city streets. Marcou says it’s the day “musicians and the music community took back the streets of Melbourne”. 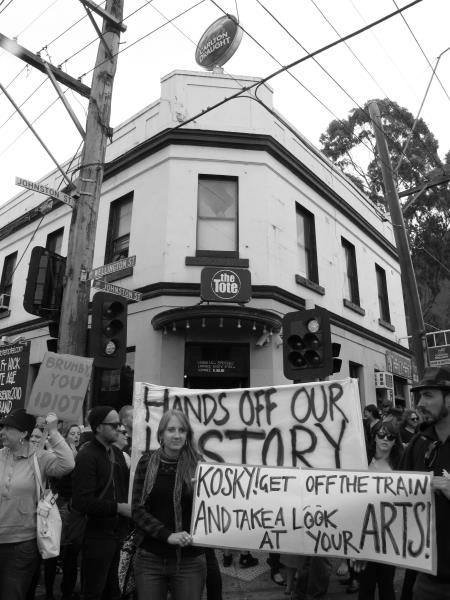 Could such an event have happened in any other Australian city?

A SLAM report stated, “One thing we are seeing in Melbourne, and that’s quite different to Sydney, Brisbane or Adelaide, is a close-knit community. Melbourne’s music community became very, very strong through the cross-pollination of the arts, community radio (RRR, PBS), and [as a result] small venues are opening up everywhere.”

Author Craig Horne released a 2019 book, Roots, how Melbourne became the live music capital of the world. Despite the title, he conceded: “Maybe the whole Melbourne live music capital thing is an abstract notion, a numbers game, a statement of product differentiation … Maybe it’s all about trying to sell Melbourne as a national and international global music city to try and capture an increased share of the overall music tourist dollar. Maybe it’s all about trying to stick it to Sydney.

“Sometimes all the bragging feels a little provincial, like Melbourne has an inferiority complex or something.”

But, Horne concludes, “there is no doubt that Melbourne is a great place to see a band on a Saturday (or any) night”.

The SLAM rally went national in 2012, with February 23 proclaimed National SLAM Day. And nearly nine years to the day after Melbourne’s SLAM event, the “Don’t Kill Live Music” rally was held in Sydney, to protest the state government’s “war on music and culture”, particularly Sydney’s lockout laws, which were lifted 11 months later.

It’s interesting to ponder what provokes outrage and moves people to take their protest to the streets. En route to Parliament House, the SLAM Rally marched past one of the city’s biggest venues, The Metro, which was renamed The Palace in 2007. The venue closed in 2014, with plans to demolish the building, an old theatre, and turn it into a hotel. A ‘Save the Palace’ campaign was launched, but gathered little attention, and six years later, the venue lies derelict, a monument to indifference.

Maybe Stephen Cummings has a point: Venues open and shut every week.

Two months after the SLAM Rally, it was announced that The Tote would return, with new licensees. The venue re-opened on June 10, 2010. The Tote was saved, and nine months after the rally, the state government signed the Live Music Accord, recognising that “live music makes a significant contribution to the cultural wellbeing of Victorians and makes a significant economic contribution to Victoria”. And Marcou says “the ridiculous assumption that linked live music to violence was broken”.

“I don’t want to bag the government,” Marcou adds, a decade on from the SLAM Rally. “With the liquor licensing laws, it really was a case of unintended consequences. And then they worked really hard with us to fix things.”

Marcou and McLean have gone from activists to advocates and industry leaders. “After the rally, we thought we’d just go back to our old lives,” smiles Marcou, who runs Richmond’s Bakehouse Studios with McLean. “But we have a responsibility to keep working and making change.”

Both Marcou and McLean received the Order of Australia award for their work.

Marcou has spoken about the SLAM Rally at music conferences around the world, while McLean relates the story of seeing a group of musicians in Mumbai doing a photoshoot on the beach – and behind them was the SLAM logo, with the message “Don’t Kill Live Music”. 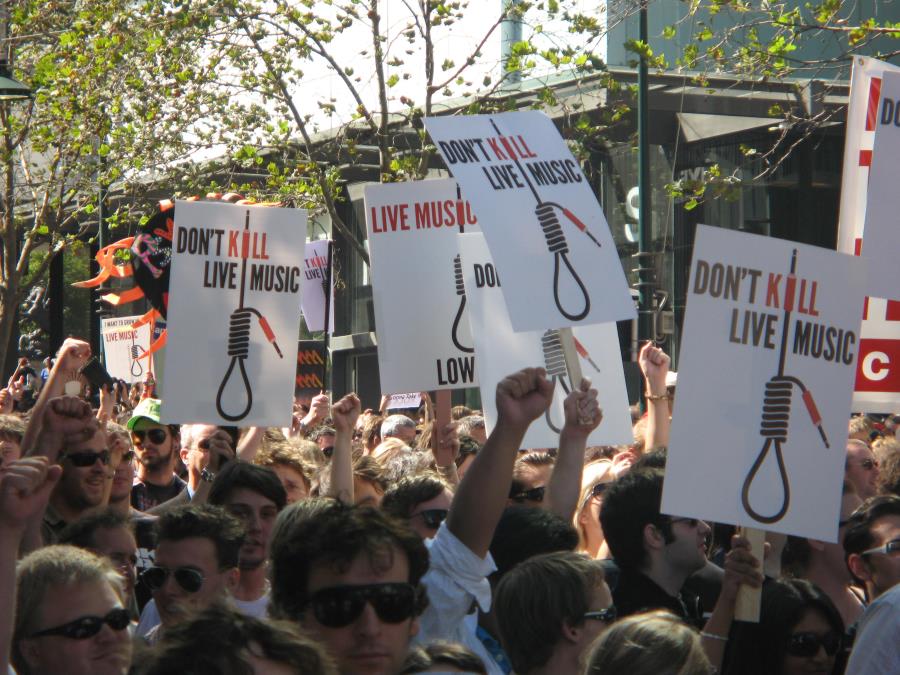 McLean has a range of emotions when he remembers the rally. “For many young people, it was their first political act, their first protest. And for a lot of people, it was a really important, special day. But for us, it really was a battle; there was a lot of hard slog, a lot of fights.”

But McLean has no regrets. He realised it was all worthwhile when he and Marcou bumped into Fraser A. Gorman at a bar one night. The young singer-songwriter revealed how the SLAM Rally had changed his life. Feeling the strength of community, he decided there and then that he wanted to become a musician.

SLAM stepped back when Music Victoria stepped up. But Marcou and McLean continue to advocate as volunteers – they have always refused to take any government money, to maintain their independence and integrity.

“Very early on, a friend of mine – a prominent musician – said to me, ‘Why are you bothering with all of this? If you let it go, it will all sort itself out.’”

But being a music fan brings its own responsibilities. You have to turn up, you have to be respectful, and you have to care about the culture.

As the Beastie Boys so eloquently put it, you gotta fight for your right to party.

JEFF JENKINS is the author of several music books, including 50 Years Of Rock In Australia and Ego Is Not A Dirty Word, The Skyhooks Story, and the co-author of Mark Opitz’s life story, Sophisto-punk, as well as two books with Ian “Molly” Meldrum – The Never, Um, Ever Ending Story and Ah Well, Nobody’s Perfect. Jeff is also a regular on RRR and ABC radio.